Orhan Pamuk: Winning the Nobel Prize Made Everything Political

Ahead of the 2008 Frankfurt Book Fair in October with Turkey as the guest country, Nobel Prize winning author Orhan Pamuk spoke to Deutsche Welle about unwanted political attention and his latest book. 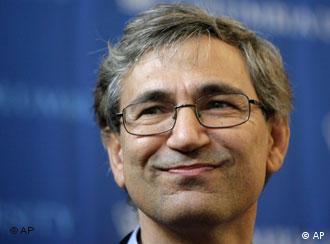 "I don't enjoy representing myself as a victim"

DW-TV: About two years ago you learned that you would be the winner of the Nobel Prize for Literature. Looking back over the past two years, has your life as a writer changed?

Orhan Pamuk: When I heard about the Nobel Prize, my first instinctive, strong impulse was to say to my agent who gave me the news that this would not change my life. I now understand that I was optimistic -- it changed my life, but it did not change my working habits. I'm still dedicated to my strict discipline of waking up early, writing, keeping up the schedule and so on.

But then, yes, it did change my life. It made me more famous, it brought me so many new readers and it made it slightly difficult -- it made everything I do more political than I'd expected.

Years ago in Frankfurt you gave a speech when you received the Peace Prize of the German Book Trade and then you were talking about Europe and Turkey. You said Turkey dreams of Europe and Europe cannot define itself without Turkey. Is this an opinion you still hold three years later?

Unfortunately the negotiations in the last few years between Europe and Turkey have mellowed down a bit. Perhaps this is because of the ultra-rightwing and the establishment and armies blocking off Turkey's road towards the European Union. And also the resistance in European nations: among the conservatives of France and Germany, who of course resist Turkey becoming a full member.

So the issue is troubled and it is not as sunny as it looked two years ago. Sooner or later I strongly believe that Turkey will be an integral part of Europe, but now the situation doesn't look so good, so it worries me -- but it does not make me cry because I am essentially a fiction writer, and if I ever cry, it's because I am worrying about the beauty of my book. 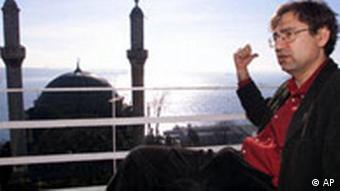 "I know what humanity is in Istanbul"

In spite of the beauty of your books there is a lot of intimidation going on against you and others in Turkey from ultra-nationalists or ultra-religious groups. Does that have an effect on your life here and on intellectual life in Turkey at the moment?

Yes, of course. It has an effect on my life, I practically live with bodyguards and living with bodyguards is not a nice thing. So I'm worried that again the ultra-rightwing and sometimes established newspapers still continue to attack me, with campaigns against me that worry me.

Besides that, because I teach at Columbia University one semester per year and now that my books are being published, I like to go to conferences. I'm traveling outside Turkey and teaching around half or more than half my time unfortunately -- or fortunately, whatever.

I've spent the last two years outside of Turkey. This is perhaps partly related to the Nobel Prize. My fame grew and grew, but then I moved back here. I have witnessed humanity in Istanbul. Oh I know what humanity is in Istanbul. I cannot think of life without Istanbul -- with bodyguards in the middle of the night, by myself alone, whatever. I am still in the streets of Istanbul and observing and enjoying it and I'll continue to write stories about the true Istanbul.

It seems as though you're trying to find a balance in your life between living in Istanbul and traveling, between being a political person and being an artist?

Living in New York during the semesters that I stay there and traveling is a nice thing, but I don't want to undermine and make a victim of myself. One reason perhaps is that I come from a culture that was never colonized and never victimized. I don't enjoy representing myself as a victim of international powers, nor the victim of a Turkish state. I am on my feet, happy, living, enjoying writing books, and so on. That is how I look at my life.

And you don't want to be a bridge builder? 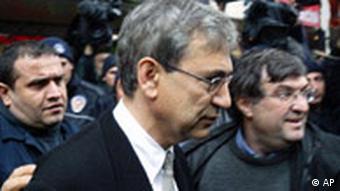 Pamuk was tried in Turkey for insulting national identity

Bridge is a cliche imposed on me just because I'm a Turk and of course the first thing everyone says about Turkey is that it's between east and west. But before being a bridge, you have to understand the humanity of the culture, its shadows, dark places, unreasonable sights, its aspirations, its hopes for the future, its daily moments, its weaknesses, its misery.

My job is to see that before saying "I'm a bridge" or something like that. That kind of political representation or agenda -- I don't have that. I am essentially a literary person, who writes stories. Yes, in my books there is also a philosophical side. I'm an essayist, I also make judgments about cultures, politics, but essentially I am a storyteller first, and mainly of stories about people.

And now you are bringing a wonderful new story to the 2008 Frankfurt Book Fair which is called "The Museum of Innocence." It's a novel about love, a wonderful love story about Istanbul of course, and also about museums. And it's the first novel in the history of literature, I think, which has its own museum.

Yes, "The Museum of Innocence" chronicles the love story of Kemal, an upper-class person, a person who is occasionally described as high-society. He is 30 years old in 1975 and chronicles his infatuation with a distant relative, a twice removed cousin, Fusun, an 18 year-old shop girl, but very beautiful. As sort of a compensation for his failure to get her hand, he collects everything he can get that Fusun touches, and in the end he makes a museum of the objects that their story is associated with.

And when we go to the museum we can relive the story just by touching and seeing the little things that appear in the book. It's like a lived memory. And in the end your hero says that everyone should know that he led a happy life. Are you leading a happy life Orhan Pamuk?

I'm leading a very happy life. I'm happy that I'm addressing readers of 58 languages, millions of readers, that I'm writing my books from the heart and they are reading whatever I write. Can there be any happier life, I thought when I was 25, and I decided to stop painting and become a writer.

I think sometimes that all of my fantasies about fame and success -- which is more than I expected -- are satisfied. I should confess that I am a happy author.

After having to cancel his German book tour due to death threats in February, Turkish author Orhan Pamuk has finally set out across Germany to present his latest autobiographical work "Istanbul." (03.05.2007)