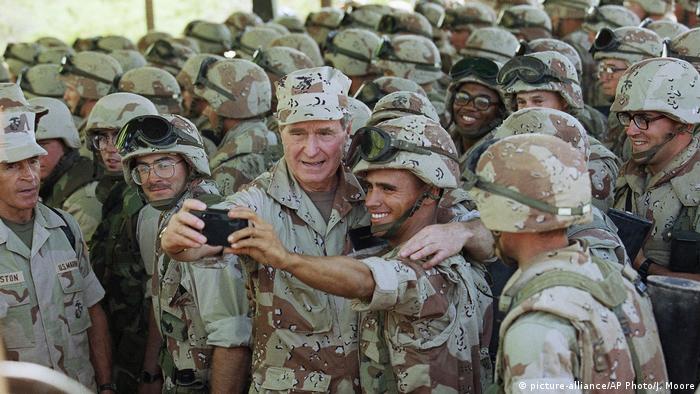 While many have eulogized the former US president for shaping world politics during turbulent times, on the African continent  the death of George H.W. Bush received little attention apart from a couple of heads of state who took to Twitter to send their condolence messages.

It was only the Kenyan and Ugandan presidents who immediately expressed their sadness at the passing of Bush Senior and how he will be greatly missed. There has also been little reporting in Africa generally about his funeral, perhaps because of his failed foreign policy on the continent.

One day later, Somali president Mohamed Abdullahi Mohamed chose not to dwell on the past. In a brief statement released early on Sunday, he expressed "heartfelt condolences."

The Somali leader described Bush as a true statesman who was committed to world peace and safeguarding democracy.

However, Bush's demise has refuelled a debate among some Somalis about the US presence in the 1990s. For some, it was an opportunity to remember family members and friends who were killed in crossfire with warlords, while for others, it brought back memories of thousands of starving people who were saved.

Let me take you back to the early 1990s when a civil war broke out in Somalia following the overthrow of dictator Siad Barre. The battle between rival clan militias for control of the country raged fiercely.

The combination of  civil war, a famine after a poor harvest and a prolonged drought meant that thousands of Somalis faced starvation. But it was not until December 1992 that President George H.W. Bush authorized the deployment of US troops to Somalia to assist with famine relief, working together with the United Nations. Under Operation Restore Hope, US troops dropped food aid to starving Somalis.

To many Americans, the Somalia mission was seen as an act of charity, a bid to feed Somalis who were on the brink of starvation.

The mission was also perceived to be a mechanism to protect ordinary Somalis from marauding militias who looted anything they set their eyes on and killed at will. The UN estimated that 300,000 Somalis were killed.

Then, in October 1993, American special forces launched a raid in the Somali capital Mogadishu with the aim of capturing a powerful Somali warlord, General Mohamed Farah Aidid. The mission failed after his militias put up a  fierce fight against the well equipped Americans. Eighteen US soldiers were killed and 80 more wounded.

The images of the bodies of American soldiers being dragged through the streets of Mogadishu as anti-American slogans were chanted were seen round the world and outraged many. It was a political miscalculation that would haunt Bush for a long time afterwards.

The failed Somalia mission changed US policy in Africa forever. With two Black Hawk helicopters shot down and 18 soldiers dead, Bush's ego and policy in Africa were both greatly diminished. Six months later, the US withdrew its forces from Somalia.

This was the turning point in one of the United States' crucial interventions in Africa's hotspots and the perceived failure of the Somalia mission made the US wary of intervening in other African crises. 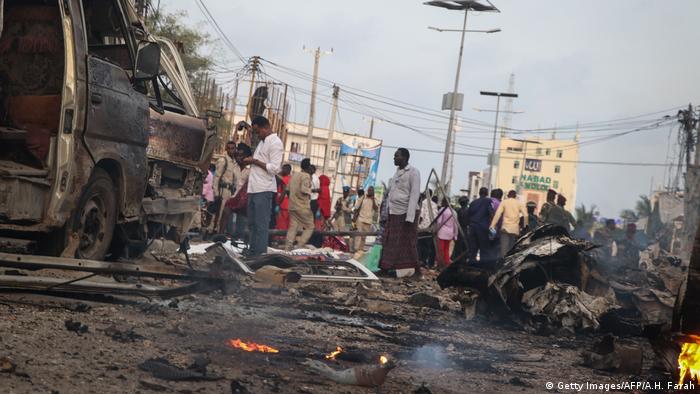 For decades now Somalia has experienced violent attacks, such as this one in Mogadishu in November 2018

The events at the time profoundly changed the way the US approached Africa. Unsurprisingly no one has talked about this since Bush's death. But because of that failed mission, Bush's successor Bill Clinton watched on as genocide was perpetrated in Rwanda soon after, claiming more than a million lives.

The memories of the dead US soldiers being dragged through the streets of Mogadishu were still very fresh, as Clinton later admitted during a brief trip to Rwanda in March 1998.

Under Clinton, the US administration focused more on supporting the continent in dealing with health matters rather than conflict resolution, especially in Africa's hotspots. The Somalia disaster was something that the Americans never wanted to experience again.

After decades of the US generally leaving the Somalis to sort themselves out, even under Bush's son, George W. Bush, it is now the Trump administration that has endeavored to support Somalia in counter terror operations. There are currently around 500 US military personnel whose main goal is to fight the al Shabab militants.

So now George H.W. Bush can rest in peace while current president Donald Trump, a man he loathed, deals with his unfinished business in Somalia, fighting militants.

Somalia's security forces shot dead a group of Islamists who tried to storm a popular hotel after detonating car bombs outside it. Authorities said dozens were killed in the explosions and gunfire, with over 100 wounded. (10.11.2018)

The man behind one of the country's deadliest attacks has been killed by firing squad, exactly a year after the tragedy. Five hundred people were killed in the truck bomb blamed on al-Shabab. (14.10.2018)