Negotiations for Turkey's possible entry to the European Union are rocky even before they have started. Deutsche Welle's Baha Güngör believes that the EU-Turkey project doesn't have a realistic chance.

Whether membership talks with Turkey can begin, as planned, on Monday will be decided at the last minute. After ambassadors from the 25 member states failed to agree on a negotiating mandate at their meeting on Thursday, EU foreign ministers now have to attend a special session in Luxembourg on Sunday, since unanimous approval is mandatory for the negotiations to start.

None of the 25 EU member states, not even Cyprus, wants to be the spoilsport, which is why there will probably be a last minute agreement to go ahead with the negotiations. But even if that's the case, the EU-Turkey project is hardly realistic.

Anyone who still thinks that one day in the distant future, after 10 or 15 years of negotiations, Turkey will become an EU member, is either naive or has no clue about the country's inner workings. Turkey is a country on the periphery of Europe and therefore, a country whose stability means much politically, economically, and in terms of security, to Europe. Those who are sensible would want to include Turkey in the continent's integration process and to get Ankara to pursue the values and visions of Europe.

Domestic politics at the center 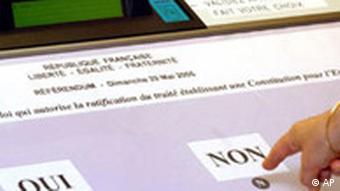 Yet before accession negotiations started, many EU countries turned the process into a self-serve buffet, looking to further their own national interests. The election campaign in Germany, as well as the French rejection of the EU constitution, which to a great deal was a rejection of Turkey, reveal this clearly.

Demands too high, too soon

If the negotiations indeed start on Monday, it will be less a question of whether they will ever successfully be brought to an end. Rather, the question will be when they can be deemed to have failed, or at least be interrupted for a few years. Grounds for failure won't be the EU's regulations, the so-called "acquis communautaire." A lengthy transition period or permanent security clauses could be agreed. Turkey is by far the largest and most densely populated country that has ever attempted EU entry. In many economic areas, it still lags far behind the EU average. But for all of these problems, solutions could be found. 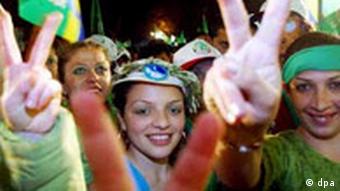 Northern, Turkish Cypriots supported reunification of the island that's been divided since 1974

But the EU is making a big mistake by demanding the maximum from Turkey, i.e. recognizing Cyprus or dealing with the Armenian genocide, right at the start of the negotiations. They're playing their trump cards wrongly, creating resentment and hardening the country that could, and also has to, address such topics in the course of drawing closer to European values.

Turks' enthusiasm for Europe has, for the most part, disappeared. The country's nationalists are gaining in popularity and are reconquering territory it had lost before. It's no secret that in the next elections, expected in two years, Turkish nationalism will experience a rebirth. The feeling is growing among Turks that the numerous reforms in the past and the strengthening of democratic forces in Asia Minor since the signing of the 1963 Association Agreement with the EU have all been for naught. 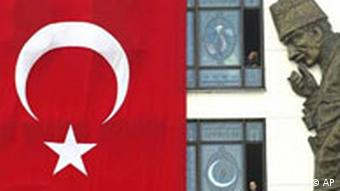 A Turkish flag and an image of the country's founder, Kemal Atatürk

It is a shame that the EU will have clumsily dropped its chance to achieve its goal of becoming a "global player" and its credibility in fostering dialogue between cultures and religions. For Turkey, it's a shame that the country's development into a democratic state will be threatened with large setbacks. For when the EU and Turkey start negotiations as planned, the participants will already be sapped of their strength. They will be short of breath for the long road ahead -- unless a miracle happens.

EU foreign ministers will hold an emergency meeting Sunday to talk about membership talks with Turkey after their ambassadors failed to reach an agreement on a negotiating mandate Thursday. (Sept. 29, 2005)

Germany's Day of Unification, Oct. 3, celebrates togetherness and solidarity. This year, however, it also marks the beginning of EU accession talks with Turkey, an issue that has had a divisive effect on German society. (Sept. 28, 2005)