One Thousand Hear Change of Note in World's Longest Concert

More than 1,000 music-lovers showed up on Saturday, July 5, in a German town to hear a change of note in the longest-running and slowest piece of music ever composed. 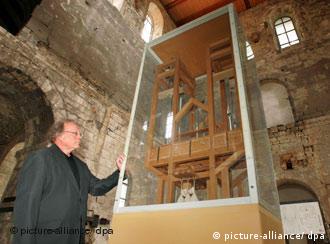 Eccentric US composer John Cage (1912-1992) planned his composition to last 639 years, meaning more than a dozen generations of musicians will be needed to play it on an automatic, as-yet unfinished organ at Halberstadt, Germany.

Entitled ORGAN2/ASLSP, it began in 2001 and has so far reached its sixth note. The second part of the name means "as slow as possible."

Neighbors have got used to the monotonous tone coming out of the former Church of St. Burchard, which was used as a pig-sty in the communist years of East Germany. At first the all-day-and-night tone sounded something like an air-raid siren.

One step at a time

The audience hushed on Saturday as two more organ pipes were added alongside the four installed so far and the tone became more complex at 3:33 p.m. local time. The second of the new pipes is set to kick in this November. A machine keeps the sound coming out.

Since some notes will not be needed for decades, pipes need only be added when donations suffice.

Organizers in Halberstadt rejected questions about what it all means.

"It doesn't mean anything," one of them said. "It's just there."

Other works by avant-garde composer Cage include one piece that consists of four minutes and 33 seconds of silence.

A new chord sounded Thursday in the world's slowest and longest lasting concert of a piece of music that is taking a total 639 years to perform in its entirety. (05.01.2006)