One third of world's food wasted each year, UN says

Approximately one third of the world's food is wasted each year, the United Nations has said in a new report. The uneaten food amounts to 3.3 billion tons of carbon dioxide produced annually. 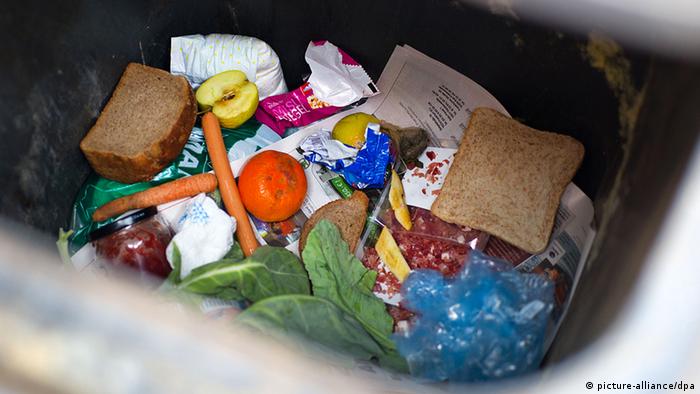 Some 1.3 billion tons of food are wasted each year, the UN's food agency said Wednesday, putting the global economic loss at around 750 billion euros ($995 billion).

In its report entitled "The Food Wastage Footprint" the Rome-based Food and Agriculture Organisation (FAO) said nearly 30 percent of the world's farmland, using "a volume of water equivalent to the annual flow of Russia's Volga River," is producing food that is not being eaten.

"We simply cannot allow one-third of all the food we produce to go to waste or be lost because of inappropriate practices, when 870 million people go hungry every day," said the FAO's director general, Jose Graziano da Silva.

Speaking to reporters in the Italian capital, he said the amount of unused food was "equivalent to the Gross Domestic Production (GDP) of Switzerland."

The total amount of uneaten food amounts to 3.3 billion tons of carbon dioxide each year.

Speaking at the joint-press conference, the head of the UN's Environment Programme (UNEP) Achim Steiner called the waste "a staggering phenomenon."

"This is a big wakeup call," he said. "We may not even have captured many of the more indirect impacts of food waste … and the costs which will be borne by our children and grandchildren."

"It will take less than 37 years to add another two billion people to the global population," Steiner added. "How on earth will we feed ourselves in the future?"

Food waste in wealthier countries was mainly caused when consumers bought too much and threw out what wasn't eaten, the FAO said. In developing nations, it was mostly the result of inefficient farming and a lack of proper storage facilities.

The report identified Asia as the main area where food is wasted, saying that more than 100 kilos (221 pounds) of vegetables per capita are wasted annually on average in "Industrialized Asia," which includes China, Japan and South Korea. The region was also estimated to waste 80 kilos of cereals – primarily rice – per person every year.