On the way out, Medvedev vows reforms

Dmitry Medvedev hands the Russian presidency next month back to his hawkish mentor, Vladimir Putin. Yet despite giving up his office, he has vowed to push for more liberalization in the economy and politics. 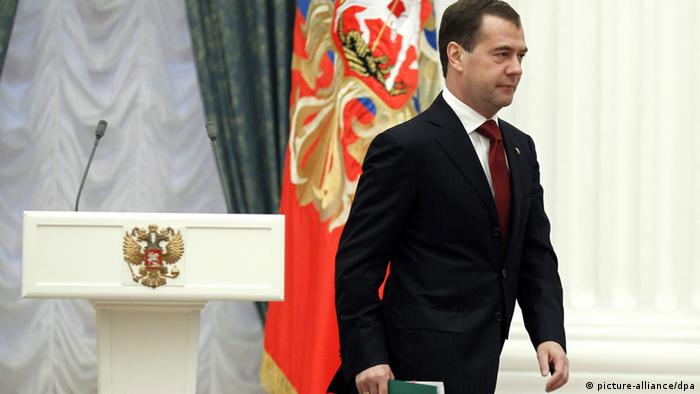 Outgoing Russian President Dmitry Medvedev summed up his four years in office on Tuesday as he prepares to take over as prime minister, vowing to push for more economic and political liberalization.

Medvedev's speech to the State Council, televised across the country, comes two weeks ahead of current Prime Minister Vladimir Putin's return to the presidency. The swap of offices is widely seen as a cynical formality, as Putin has been the dominant figure in Russian politics for more than a decade.

"The development of civil and economic freedoms is my primary objective," Medvedev told a meeting of Russia's political elite at the Kremlin. "Everyone needs freedoms - this is an axiom."

Medvedev promised to submit a list of state-owned enterprises that could be privatized, not to raise taxes on businesses and to fulfill "everything that was promised" while he was president.

Human rights activists are calling for the release of the Russian punk band Pussy Riot. The three feminists are facing up to seven years in prison following a performance against Putin in a Moscow cathedral. (12.04.2012)

"The state's intervention in the economy should be minimal and transparent," he added.

Medvedev is considered more reform-minded than Putin, but he failed in his four-year term to root out corruption in the private and public sectors and to create a climate for political pluralism.

The Russian parliament was due to vote later on Tuesday to restore direct elections of regional governors, one of Medvedev's promises to protesters. However the Kremlin would still have effectual veto power over undesirable candidates, leading to doubts that the law would actually change Moscow's tight grip on power.