Commuters often compare themselves to sardines in a tin as they ride trains to work. But real fish have been making homes of old trains off the coast of Delaware, and some experts are not too happy about it. 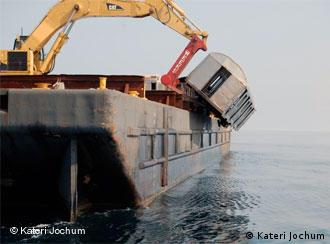 A New York subway car is dumped into the Atlantic Ocean

In 2001, New York City's Metropolitan Transit Authority (MTA) offered the Delaware Department of Fishery its old subway cars for the state's artificial reef program, which began in 1996. From then on, it has been called the "Redbird Reef" in honor of New York subway trains, which were called Redbirds.

Sea bass, blue fish, summer flounder and other species have taken refuge in the reef from sharks and other predators. But the nearly 1300 subway cars off Delaware's coast don't just create a safe haven.

"The hard surface of the subway cars is a unique thing down there. Around here, the blue mussels attach themselves and that provides a carpet that has dozens of other species of worms, crabs, and shrimps. The sum of that community is an enriched food source that benefits the reef fish," Jeff Tinsmann, coordinator of Delaware's artificial reef program told Deutsche Welle.

Indeed, fishing enthusiasts, like Kathy Baker, can attest to the flourishing world below. She and her husband own a sports shop in the tourist town of Rehoboth Beach, Delaware. Before the reef was made, she spent hours fishing without catching anything. 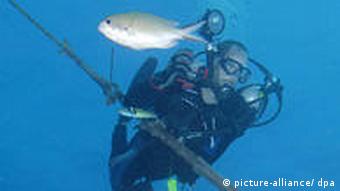 A diver descends upon a wreck in a reef off Key Largo, Florida

"But once the structures are put in – it is magnificent," Baker said. It is my favourite kind of fishing. My son was visiting from Florida and we caught eight different species of fish in one day."

But the Metropolitan Transit Authority isn't sinking the carriages out of charity.

The subway cars contain asbestos. And although it costs the MTA $17,000 per carriage to dump old wagons into the Atlantic, it is still cheaper than complying with regulations for the disposal of asbestos on land.

The US Environmental Protection Agency has ruled that this particular asbestos is not dangerous, so MTA has turned more than 2500 subway cars into artificial reefs and found a way to save itself $34 million dollars.

But the environmental ruling hasn't left everyone as happy as a clam.

She says that when the metal on the cars corrodes, the blue mussels attach themselves directly to the asbestos, and fish that eat the mussels get exposed to the poison.

"These did not meet the long-term, clean and healthy materials that would make up artificial reef habitat," Zipf said. 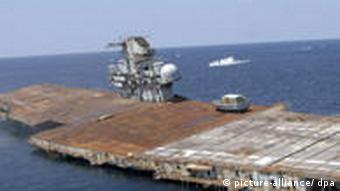 Zipf is worried that the project could set a precedent for dumping asbestos in the ocean as a cheap alternative to safe disposal.

No more trains for underwater graveyard

There are no long-term studies of the effects of the subway cars' asbestos on the marine life. Even so, New York trains will no longer find their final resting place on the ocean floor. The latest subway cars are designed differently, and there will no longer be any financial incentive for the MTA to continue the reef project.

Mike Zacchea, Director of Recycling at the MTA, whose idea it was to turn trains into reefs, thinks subway cars are much more than a means of transportation.

"The subway is such an integral part of the New York city dweller's life," Zacchea said. "They meet new loves and old loves, they get fired from jobs, and all of that is woven into the fabric of their lives. Now the cars will serve the marine community for another 20 years we hope."

In Nusa Dua, a luxury holiday resort in the south of Bali, everything seems just perfect but the region is suffering from the consequences of mass tourism as well as from the effects of global warming. (03.03.2008)

Fishing for Trouble among the Philippines’ Coral Reefs

In the past decades, fish has gone from being a food product that could be bought at a regional level to a raw commodity that is traded on the world markets. Modern equipment has made it possible to expand fishing fleets. European and Japanese fleets in particular have started plundering the high seas for luxury fish. Marine biodiversity is at risk from the fishing industry, especially the use of destructive fishing methods such as dynamite fishing. The FAO estimates that 70 percent of the world’s commercial fish stocks are depleted or overfished. It is a global exploitation with very local consequences. (14.01.2009)

Jumping the barriers on the Paris metro

A group of French fare-dodgers has come up a novel way of avoiding paying for their rides - by paying into a mutual aid scheme to pay members' fines if they are caught. (04.05.2010)