An Ohio police officer who had shot a black man during a routine traffic stop faces homicide charges. The incident is the latest in a series of fatal police confrontations in the US involving minorities. 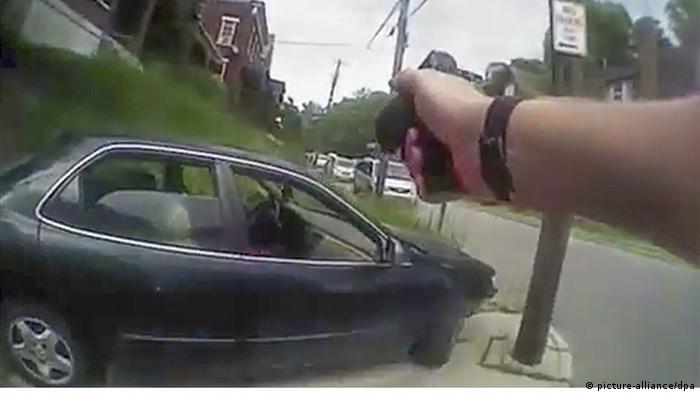 A University of Cincinnati police officer who fatally shot a motorist over a missing front license plate has been indicted on murder charges. Officer Ray Tensing killed 43-year-old Samuel DuBose during a traffic stop on July 19.

Hamilton County prosecutor Joe Deters announced the grand jury indictment at a news conference to discuss developments in the investigation.

Authorities said Tensing had spotted a car driven by DuBose and had noticed that the front license plate was missing. Ohio law requires license plates on both the front and the rear of a car.

The incident was captured on Tensing's body camera. Video from the camera was released Wednesday. It shows how Tensing then stopped the vehicle. The two exchanged words after DuBose refused to provide a driver's license and get out of the car. DuBose started the engine and moved the car forward. Tensing said he was dragged by the car and forced to shoot at DuBose. He fired one shot, striking him in the head.

But Deters dismissed Tensing's claim that he was dragged and suggested he shouldn't have pulled DuBose over to begin with.

Deters added that he hoped the swift action by his office would show that justice was being done in this case.

"I feel so sorry for his family and I feel sorry for the community," he said.

Tensing turned himself in Wednesday afternoon at the Hamilton County Justice Center and was processed on charges of murder and voluntary manslaughter. If convicted, Tensing could face up to life in prison.

The University of Cincinnati said it fired Tensing after his indictment.