Germany's new EU energy commissioner Guenther Oettinger declared his intention to tighten Europe's energy laws during his questioning by the European Parliament Thursday. Spectators agreed he made a good impression. 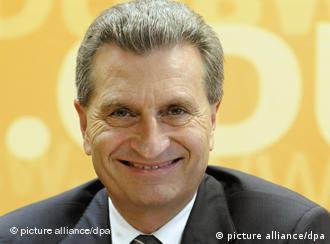 Some doubt that Oettinger is an ideal candidate

The key question came from Reinhard Buetikofer, a Green party MEP from Baden-Wuerttemberg, the state which Oettinger governs. Buetikofer asked whether Oettinger would introduce binding energy conditions for member states if it became apparent that the EU would not reach its target of getting 20 percent of its energy from renewable sources by 2020. 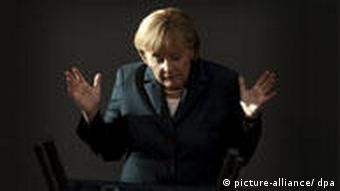 There have been suggestions that Merkel has sidelined a rival

Oettinger replied that he was prepared to introduce such measures in two years "if not enough is achieved voluntarily or through market forces."

Oettinger had a similarly clear answer to Austrian MEP Hannes Swoboda's question about the future standards required for nuclear waste storage. "They must be the highest," he said. "And they must be determined by the latest scientific findings." He added that this would also be the case, even if it "led to extra costs or problems for the operators."

The new commissioner also called on the EU to work in partnership with Russia on key energy issues like securing a constant supply of cheap energy and the problems of energy storage.

The state premier of Baden-Wuerttemberg, who plans to give up his post at the end of January, apparently gave a good impression at the three-hour parliamentary hearing, receiving applause on several occasions. He said he would be a "moderator, and not an ambassador for nuclear power," and that he accepted that energy would and should be gained from many different sources.

Last October, German Chancellor Angela Merkel surprised many in Brussels and Berlin by nominating Oettinger for the post of energy commissioner. The regional politician has no track record in European politics, and the appointment was seen by many as having more to do with Merkel's party political agenda than his suitability for the job.

If he's approved, Oettinger will be responsible for important new projects in his five-year tenure at the EU, like gas pipelines and developing more efficient energy supplies, though his actual policy-making power would be fairly limited. 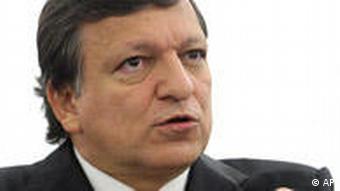 Barroso was said to have asked "What's this?" when Oettinger's name first came up

But Oettinger, a member of Angela Merkel's Christian Democratic Union (CDU), also has a checkered political past. His dealings with his home state's energy giant EnBW drew some attention, as did his ill-advised eulogy to Hans Karl Filbinger, a former Baden-Wuerttemberg premier with a Nazi past.

There have also been awkward questions in recent weeks on the subject of money-laundering. The government of Baden-Wuerttemberg recently faced accusations from the federal finance ministry, as well as a lawsuit from an independent financial advisor, for not doing enough to fight money-laundering.

Back in October, Barroso reportedly asked "What's this all about?" on learning that a state politician with an image problem was to be sent to Brussels to represent Germany. Oettinger's appointment also got the rumor mill turning in Berlin, where there were suspicions that Merkel removed him from domestic politics out of self-interest, "dumping" a potential rival in Brussels.

The head of the European Commission unveiled his new cabinet on Friday. Jose Manuel Barroso handed the plum economic portfolios to Spain, Finland, France and Belgium after some last-minute horse-trading. (27.11.2009)

News that Germany has nominated Guenther Oettinger, the premier of the state of Baden-Wuerttemberg, to be its next EU commissioner has bemused Brussels, where he has no track record at all. (27.10.2009)

An EnBW nuclear power station in Baden-Wuerttemberg has been accused of slowing its energy production to extend its lifespan until the nuclear-friendly coalition came to power. (13.10.2009)