US President Barack Obama and Malaysian Prime Minister Najib Razak have vowed closer ties. The announcement came during Obama's Asia tour, as he seeks to rebalance diplomatic relations with the region's leading nations. 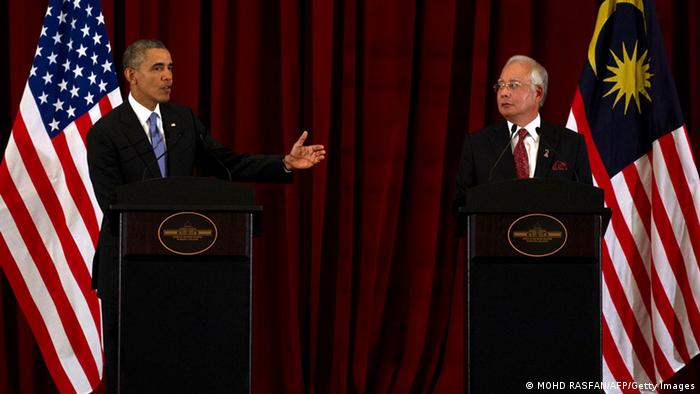 The visit of US President Obama to Malaysia over the weekend was expected to result in an agreement of closer security and trade ties between the two nations. Following a private meeting on Sunday morning, the two leaders held a joint press conference in Kuala Lumpur.

"We also decided to (reconfigure) senior officials' dialogues as a key forum for high-level discussion,” he added.

Obama is the first US president to visit Malaysia since Lyndon Johnson in 1966. His stop in the Asian country - home to a diverse ethnic and religious population - came on the third leg of his tour of the continent. Relations were strained during the 1981-2003 tenure of Malaysia's authoritarian leader Mahathir Mohamad, who was a strong critic of US policies.

The US leader gave few details of how future relations with Malaysia would look at the Sunday press conference. Instead he opted to focus on implications of the Malaysian government's handling of missing Malaysian Airlines flight MH370 and its human rights records.

Referring to Kuala Lumpur's failure to effectively disclose key information about the missing Boeing 777 early on in the search, Obama stressed that it must cooperate between its foreign partners.

"There should be full transparency in terms of what we know and what we don't know," Obama said.

He also pledged further US assistance in the case, which has required a wealth of financial and logistical resources to scan the southern Indian Ocean.

"I can tell you the United States is absolutely committed to providing whatever resources and assets that we can," Obama said.

Kuala Lumpur has drawn the most criticism from Beijing, in particular, for its handling of the mysterious disappearance of MH370. Nearly two-thirds of the 239 passengers on board were Chinese nationals.

Malayisa still has 'work to do'

Ahead of his visit, human rights activists urged Obama to meet with convicted opposition leader Anwar Ibrahim, who faces a jail sentence on sodomy charges. Ibrahim has said the charges were politically motivated by a "corrupt and authoritarian regime."

Obama – who has sent national security advisor Susan Rice to meet with Ibrahim on Monday – called for the Malaysian government to be more aware of the dangers of discrimination.

"I think we just have to be clear and stead in denouncing it, teaching our children differently," the US president said, adding that he would continue encouraging the Malaysian premier to "make sure he makes progress on that front."

"I think the prime minister is the first to acknowledge that Malaysia's still got some work to do," Obama added.

Muslims comprise roughly 60 percent of the ethnically and religiously diverse country's population, while Buddhists account for about 19 percent and Christians roughly 10 percent. Approximately 50 percent of Malaysians come from the ethnic Malay community, and a further 23 percent from the ethnic Chinese community.

Critics accuse the Malaysian premier of attempting to shore up Malay votes by infringing on the rights of minority ethnic and religious groups.

Obama is scheduled to wrap up his Asia tour, which began with visits to Japan and South Korea, with a visit to the Philippines on Monday.