In German lore, the Christkind leaves presents under the tree on Christmas Eve. But Nuremberg brings the Christkind down to earth long before the 24th to be one of the biggest attractions at its famous Christmas market. 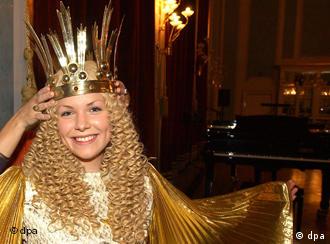 And the winner is: Christin Strauber (17) of Nuremberg.

Being Nuremberg’s Christkind isn’t an easy job, but for 17-year-old Christin Strauber, it’s a dream come true. The people of Nuremberg vote for the angelic messenger every two years, and for three weeks in December, while the city’s Christmas market is open, the winner has a packed program. In addition to promotional work and appointments with the media, the Christkind carries out public engagements such as visiting schools and hospitals.

Strauber competed with around 60 other teenage girls for the honor of playing the Christkind, and survived both an initial round of Internet voting open to all, plus the scrutiny of a jury comprised of Nuremberg’s heads of marketing and tourism, journalists, and of course, the outgoing Christkind.

Having convinced the jury of her commitment, stamina, as well as acting and singing ability, it was Strauber who donned the long dress, blond wig of curls and tall gold crown for the Christkind’s most important appearance: the official opening of the Nuremberg Christmas market. 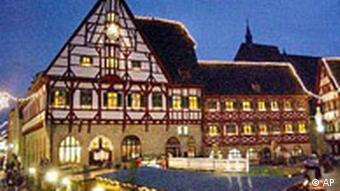 Twice a week, Strauber visits the market to read fairytales to the children who gather around a stage. Afterwards, they can give the Christkind their Christmas lists, as in Germany, it’s the Christkind, not Santa Claus, who traditionally brings the presents on Christmas Eve.

Not all fun and games

Strauber says that not all of her duties are as simple as the story-telling hour with the kids at the Christmas Market. “In hospitals and homes for the elderly, it can often be quite difficult,” Strauber told Deutsche Welle. “I visited a woman who was lying in bed and could hardly open her eyes. Her husband was trying to feed her, and I couldn’t hold back my tears, because it was so obvious how much he loved her, and that she didn’t have much longer to live.”

Sometimes it’s the people she visits who get teary-eyed, so touched are they at the appearance of the Christkind, who according to German tradition, is a heavenly messenger from the Christ child.

The making of a myth

The Christkind was originally introduced in the 16th century by religious reformer Martin Luther. Until then, it was always Saint Nicholas who brought gifts on Dec. 6. But as Protestants can’t have saints, Luther needed a new Christmas tradition for his followers. “Luther wanted to move the gift-giving away from the Catholic holiday on Dec. 6,” said Nuremberg tourism manager Michael Weber. “So he reinvented the tradition for Protestants by moving it to Christmas Eve and making the Christkind – really, the baby Jesus – the person who brought the gifts.”

It was under the rule of the National Socialists that the image of today’s Christkind was ultimately anchored in the collective German mind. They built on Nuremberg’s tradition of producing tinsel angels, and in 1933, had a young girl in an angel costume open the city’s Christmas Market for the first time. After the second World War, Nuremberg’s tinsel angels became simply the Nuremberg Christkind, and the figures were sold nation-wide.

For Strauber, her time as the Nuremberg Christkind is a chance to “spread Christian beliefs.” She says she tells curious children that the Christkind knows about the behavior of every boy and girl, but doesn’t punish. That job goes to another German Christmas figure, Knecht Ruprecht, Saint Nicholaus’ grumpy sidekick. Strauber has already developed tactics to deal with the more sceptical kids that cross her path. When challenged to fly, she tells them that the Christkind only flies at night.

Beneath her angelic exterior, though, Strauber is still a normal 17-year old, slightly giddy at the sudden fame her new job has brought. “I wasn’t at all prepared for the media attention,” she said. “It was like being thrown in the deep end. When the vote was announced there were at least six newspaper reporters there and five camera teams. I’m used to it now, but it made me really nervous at first.” Strauber also admits to surfing around a lot more on the Internet since she won the vote, just to see where her name pops up. Even the Christkind, it seems, is allowed a little vanity.

Each year, tourists from around the globe flock to Germany's traditional Christmas markets. But a new kind of market lets visitors experience the holiday as it was celebrated hundreds of years ago. (Dec.1, 2003)