Unemployment in Germany stands at its lowest level since 1991. According to government figures, less than three million - or 7.5 percent - are out of work. Analysts expect the positive trend to continue. 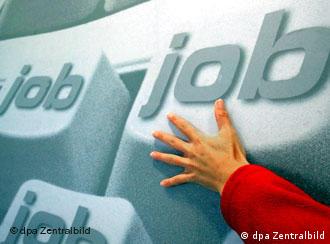 Germany's labor market seems to have weathered the crisis

The number of people looking for a job in Germany has fallen to below the three-million mark, Labor Minister Ursula von der Leyen announced on Wednesday. Unemployment now stands at a seasonally adjusted 7.5 percent.

According to government figures, just over 2.9 million Germans were jobless by end of October - 86,000 fewer than in the previous month.

Von der Leyen described the reduction in the jobless number as a "big success" - the new figure is the lowest since 1991.

Economics Minister Rainer Bruederle, meanwhile, expressed optimism that the positive trend would continue. "This is not just a one-day success," he said. Unemployment figures have been dropping gradually since mid-2009.

Analysts predict the number of unemployed to briefly rise above three million early next year but for most of 2011 the figures are expected to remain below that threshold.

The reason being cited for the strong labor market is Germany's quick recovery from the global financial crisis.

Just last year, Germany was hit by its steepest downturn in about six decades when the economy contracted by 4.7 percent. But now exports are booming and German companies are reporting solid profits.

During the recession, a government program to subsidize shortened working hours for employees, allowed German companies to avoid layoffs. This meant they were able to respond to an upturn in orders without delays associated with having to rehire workers.

The German economy appears set to continue its current strong growth. The government released figures on Thursday sharply raising its figures from a previous forecast and predicting a drop in unemployment. (21.10.2010)

The German government has put forth a bill to increase unemployment payments by five euros a month - but critics say it's not enough. Included in the resolution are 700 million euros to help educate poor children. (20.10.2010)