″Nobody Comes From England to Cause Trouble″ | News and current affairs from Germany and around the world | DW | 30.06.2006

"Nobody Comes From England to Cause Trouble"

The head of the British police in Germany for the World Cup, Stephen Thomas, gave DW-WORLD.DE his view on stadium security and how excessive drinking, not hooliganism, is behind arrests of English fans in Germany. 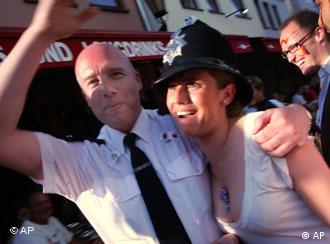 Doesn't look like this bobby is having any serious problems

DW-WORLD.DE: What is your impression of the security situation inside the World Cup stadiums?

Stephen Thomas: It's absolutely excellent. The stadiums where I've managed to visit and look around, there are hardly any police officers at all. There is a lot of good work by the volunteers and good work by the stewards who control all the crowds.

What about outside the stadiums in the cities where games are being played?

The problems that there have been here are the same as what we have in England. Particularly with England supporters, and some other countries as well, people are so desperate to get in that they are jumping fences, dressing up as stewards and all sorts of things to get in to see the games. 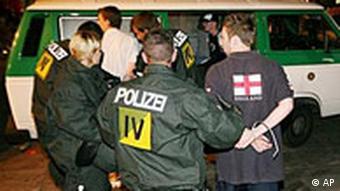 Some 500 England fans were arrested in Stuttgart

There were some problems with England supporters in Stuttgart and nearly all of the people who were held have been released. What are you doing to make sure the same thing does not happen when England play Portugal in Gelsenkirchen?

Just some numbers right from the start: In Frankfurt there were 70,000 English supporters and very little trouble. In Nuremberg there were 50,000, and in Stuttgart there were 65,000 English supporters in town. We've got 3,700 people banned from leaving the UK during the tournament and there is really good work going on in the English ports so that nobody who we think will be causing trouble will be able to travel to Germany. We haven't got a football hooligan problem here in Germany.

What we have got, and we saw that quite clearly in Stuttgart, is a group of men who will travel to a venue city, band together and drink all day. As they get too drunk late in the night or early in the morning, that's when we see the sort of problems we've seen in all the cities so far and particularly so in Stuttgart.

There were two reasons for what happened in Stuttgart. One was that in all the other venue cities, there were tens of thousands of English supports arriving two or three days before the game, and you so saw the type of carnival atmosphere the majority of our supporters enjoy. In Stuttgart, most of the people arrived on the day of the game because of the difficulty in knowing where you were going to go in the knock-out stages and arranging hotel accommodation. That meant that the 1,000 or so committed, heavy drinkers who were there stood out more. Also the location they chose was right opposite the entrance to the fan park. Because of the prominence of the location, the police were forced to act in a very different way than they did in the other cities. That directly led to the high numbers of arrests. 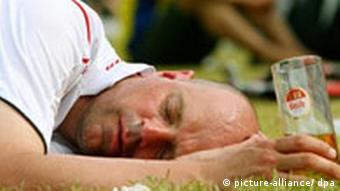 England fans in Cologne proved to be easy to cope with

Do you expect more problems as England advance since fans won't know where to go or where to book accommodation?

We'll see similar sorts of issues with our supporters. In Gelsenkirchen, there is very little knowledge about where our supporters will be based. Gelsenkirchen is a fairly small place, but we have Düsseldorf, Dortmund and Cologne very close, so the fans will be far more spread out.

Does that make it easier or harder for people to cause problems?

Nobody comes from England these days with the intent of causing trouble. We have what we call a laddish culture where people get drunk, and act boorish and rude. If you get four or five hundred of them grouped together, people who are starting to drink at 8:30 in the morning and drinking right through the day, by the end of the day they get very drunk, and that is when they start crossing the line of what is acceptable behavior. 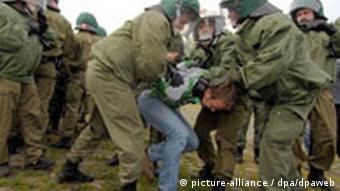 The worst-case scenarios of hooligan violence seem to have been avoided. What do you think were the main factors that played a role in that?

As far as the English are concerned, many of the 3,700 people who would have caused trouble in Germany can't leave the UK. Also the Polish team did very badly, and I think that affected their supporters to some extent.

Generally a tournament like the World Cup is one of supporters mixing with each other. In a World Cup, because the vast majority of people want to have fun, it's very difficult for the small number who want to cause trouble to do that. Amongst England fans, even some of these drunks, you'll see other supporters who will actually stop them and say, "That's enough. We're guests here, there's been a great welcome, and you don't treat hosts in the way you're starting to behave."

Continue reading about Thomas' views on differences between British and German policing styles and his prediction for the England-Portugal quarter-final. 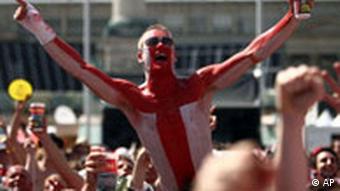 What are some of the differences in approaches to dealing with problem fans in England and Germany?

The interesting thing for us has been the differences in the German legal system. That's seen in particular in the reluctance to close bars here. Whereas back home we do that without thinking because we have the legislative power to do it.

The preventative detention power the German police have is also interesting. It is an alien concept to us because we don't have those powers back in the UK. Some of our supporters don't understand them either. We've been working very hard to get the message out that German police can round up large numbers and detain everybody, because you're in a crowd that is acting in a disorderly manner.

Is that something you would like to see possible in the UK?

I don't think we need that power, because we have other powers that we use. We have a very different approach. We would have approached these issues in Stuttgart in a different way. We would have closed the bar fairly early on, but of course the German legislation says these people are entitled to drink, and the bar owner is entitled to make a living.

You're scheduled to stay in Germany for as long as the England team is here. How many more hotel reservations do you have?

My hope from the start of the tournament was that we have a German-English final in Berlin. I think it would be incredible for football. I also think it's important for the host nation to get to the final because that creates such an atmosphere. If England don't get there, I certainly want Germany to be in the final.

Five hundred English soccer fans have been detained in Stuttgart for mostly drunken and aggressive behavior in the leadup to England's second-round match against Ecuador. (June 25, 2006)

Drunken singing, smashed glasses, scared and alienated locals... It's all sadly familiar. England are at a World Cup and certain fans are causing chaos. Yet these rowdies sport designer pumps and are blinged to the max. (June 29, 2006)