No US airstrikes in Iraq without national unity government | Middle East| News and analysis of events in the Arab world | DW | 25.06.2014

No US airstrikes in Iraq without national unity government

The United States has refused to launch airstrikes against Sunni Islamist militants in Iraq, if Baghdad does not form an inclusive government. Shiite Prime Minister Nouri al-Maliki's days could be numbered. 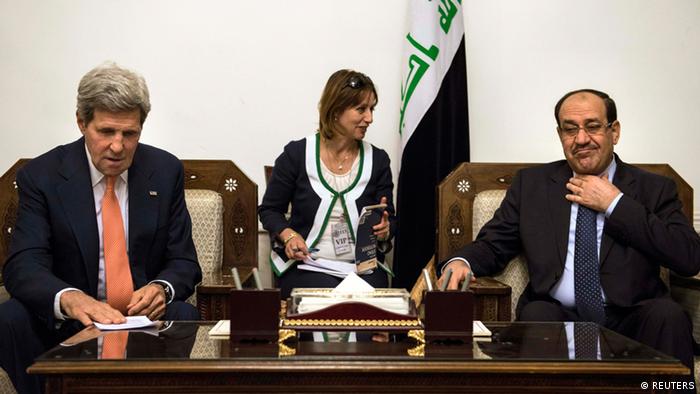 US Secretary of State John Kerry has ruled out airstrikes against the rapidly advancing Islamist State in Iraq and Syria (ISIS) unless Baghdad forms a more inclusive government, upping the political pressure on Nouri al-Maliki to work with the Sunnis and Kurds, or step aside as prime minister.

"It would be a complete and total act of irresponsibility for the president to just order a few strikes," Kerry told CBS News on Tuesday. "But there's no government, there's no backup, there's no military - there's nothing there that provides the capacity for success."

"The president reserves the right to use force as he does anywhere in the world, if it is necessary," Kerry said. "But he wants to do so … with knowledge that there's a government in place that can actually follow through and guarantee that what the United States is working toward can actually be achieved."

But Prime Minister al-Maliki, a Shiite, rejected calls on Wednesday for a national unity government with Sunnis and Kurds, saying such a step would amount to a coup. Maliki's State of Law alliance won the most seats in parliamentary elections last April, but fell short of the majority needed to form a government without help from rival parties.

"The call to form a national salvation government constitutes a coup against the constitution and the political process," Maliki said in a televised address.

But there's nothing in the Iraqi constitution that would prevent a national unity government from being formed under the current circumstances, according to Iraq expert Eric Davis, who called Maliki's assertion "ridiculous." Iraq's new parliament meets on the first of July and is set to begin the process of forming a government.

"What people have been suggesting is not a constitutional coup," Davis, a professor at Rutgers University, told DW. "They're [suggesting] the same thing that happened in 2006 when Ibrahim al-Jaafari, also a member of Maliki's Dawa party, stepped aside for Maliki." 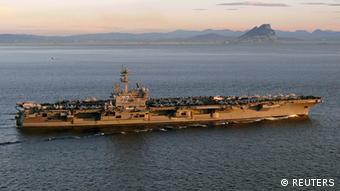 Washington has deployed the USS George H.W. Bush to the Persian Gulf to prepare for possible military action

Tariq Nejm and Adil Abdul-Mahdi have both been floated as possible successors to Maliki, according to Davis. Nejm is an adviser to Maliki, while Abdul-Mahdi is a French trained economist and former finance minister. Both are members of the Dawa party and are said to have better ties with the Sunni community.

"The Sunnis continue to say that these actions against Maliki have nothing to do with Sunnis and Shiites, it's their marginalization," Davis said.

"We could see the whole country go to hell in a hand basket, and it seems to me that one individual able to gum up all the works is a very problematic situation," he added.

According to Andrew Bacevich, Washington's repeated claims that it's not meddling in Iraq's internal politics amount to little more than rhetoric.

"The public comments that choosing Iraqi leaders is the business of the Iraqi people is exclusively for public consumption," Bacevich, a professor at Boston University and retired US Army colonel, told DW via email. "The US government is not the only government working behind the scenes to influence Iraqi politics."

If Baghdad does not take steps to address Sunni grievances, it makes little sense for the US to launch airstrikes, according to Noussaibah Younis, an Iraq expert at Harvard's Belfer Center for Science and International Affairs.

"Bombing targets in Sunni dominated areas of Iraq without a concurrent political process taking place to include Iraq's Sunnis…may serve only to further strengthen ISIS support," Younis wrote in an email to DW.

But Bacevich believes that the White House is likely to act regardless of what happens in Baghdad.

"[...]Yesterday Kerry promised 'intense' and 'sustained' US support," he said. "My sense is that if ISIS continues to advance we are likely to see US military action even if the political situation in Baghdad remains unresolved."

US advisers begin their mission in Iraq amid ISIS insurgency

The first of up to 300 US military advisers have begun their mission in Iraq. They have been tasked with evaluating the state of the Iraqi forces in their battle against Sunni militants. (24.06.2014)

US Secretary of State John Kerry has arrived in Irbil, the capital of Iraq’s autonomous Kurdish region. There he hopes to convince leaders to help form a more inclusive government in a bid to prevent war in Iraq. (24.06.2014)