The first edition of The International New York Times has rolled off presses around the world. The 126-year-old International Herald Tribune ceased publication under that name on Monday. 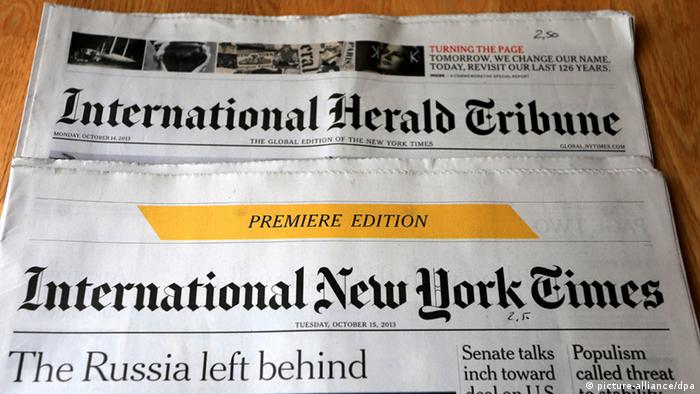 Though The New York Times Company had announced the change months ago, the new name made its debut with Tuesday's edition of the paper. Richard Stevenson, the former Europe editor of The International Herald Tribune (IHT), told the news agency AFP that those nostalgic for the old title need not fear much.

"A couple of words in the name of the paper are changing, (but) this paper's name has changed multiple times throughout its history," Stevenson said. "The name change on the print newspaper does nothing to change the DNA of the operation here," he added. "It is simply bringing more of the resources of The New York Times to the mix."

The New York Times and Washington Post had co-owned the Paris-based IHT from 1967 until 2003, when The Times became its sole owner and restyled the newspaper as its global edition. In 2011, the company printed the IHT at 38 sites and distributed it to about 226,000 readers in more than 160 countries.

Huffington: 'Self-expression is the new entertainment'

As the Huffington Post website launches a German edition, founder Arianna Huffington is planning further expansion. DW asks how her blend of journalism and commentary will change the country's media scene. (10.10.2013)

Some Twitter users expressed regret about the name change. "A sad day for expats," wrote one. Another tweeted: "All IHT had to do was redesign. The name change to 'New York' signals a new provincial thinking and outlook."

Stevenson believes IHT readers will adapt quickly, calling the change "something that says to our readers all over the world that we are one news organization, capable of covering the world on any platform - print, digital - in any time zone."