Countering a popular misconception, a German scientist has discovered that bees are far from the industrious little workers humans imagine them to be. 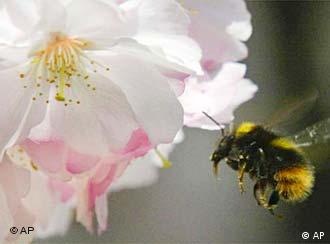 Those furry-looking black and white striped members of the insect world have been fooling us humans all along. Their deception has finally come to light.

"Bees aren't particularly hardworking," Berlin neurobiologist and zoologist Randolf Menzel, who has been researching the creatures for nearly 40 years, told German news agency dpa. "Instead they sleep a lot and are rather lazy."

"They spend around 80 percent of the night sleeping, and even during the day they often fly into the hive and give their wings a rest."

But, as if to make up for the inevitable disappointment that his statements would cause, Menzel explained that bees have other redeeming qualities. They are quick learners, recognize various scents and have five memory phases.

"If the bee is rewarded once for its behavior, it will remember it for a week. If it's rewarded three times, it won't forget it for the rest of its life," Menzel said.

Furthermore, bees' superb memories allow them to tell the difference between numerous colors and more than 50 scents. And their sense of smell is similar to that of humans.

"What smells good to bees, is also a pleasant smell for people," Menzel said.

Menzel was awarded a €10,000 prize last week from the German Zoological Society for his work with bees.

An escaped pet kangaroo kept German police in pursuit for several hours before its owner managed to catch it with a giant net. (June 16, 2004)

A new German movie star is attempting to do what compatriots Til Schweiger and others failed to do - crack Hollywood. His first film is a huge hit which will keep him in cheese for the rest of his life. (June 6, 2004)

The owner of a shop selling traditional German clothing has put her talents in the service of man's best friend, designing Lederhosen and other typically Bavarian garb for canines. No word yet on what the dogs think. (June 17, 2004)