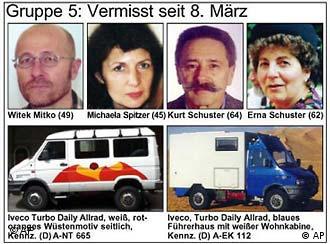 Amari Saifi, a leader of the Algerian Islamic militant Group for Preaching and Combat (GSPC) that is thought to have ties to al Qaeda, told Paris Match magazine on Thursday that his group had received ransom payments to release the 32 mainly German hostages they had kidnapped last year.

Although it has long been suspected that Germany paid around €5 million ($6 million) to have the hostages freed, there had been no confirmation of any payment. In Berlin, the foreign ministry refused comment. "The German government's fundamental position refusing to pay out ransom is well known," a spokesman told news agency AFP.

Questioned about the exact sum paid, Saifi told Paris Match: "We made a promise to the German government not to divulge the amount." He added that "most was spent buying supplies for our brothers in Algeria. We also bought weapons and ammunition."

Saifi -- who is also known as Abderrezak "the Para" for his time as a paratrooper in the Algerian army -- led the GSPC group that kidnapped 32 European tourists in separate incidents in February and March 2003 as the visitors crossed the Sahara. He is currently being held captive in northern Chad by the rebel Movement for Democracy and Justice in Chad (MDJT).

Seventeen of the tourists -- 10 Austrians, six Germans and a Swede -- were freed in May 2003 during an assault by the Algerian army. Three months later, nine Germans, four Swiss and a Dutchman were released in Mali following negotiations between the GSPC and the German government. One other hostage, a German woman, died while in captivity.

Germany issued an international arrest warrant last September for Saifi over the kidnappings.

The MDJT said in mid-March this year that they had captured Saifi and other GSPC members. It has since repeatedly expressed willingness to turn Saifi over to Algeria, which wants to put him on trial.

Fourteen European tourists, held hostage by Algerian militants in the Sahara Desert for over five months, have been released. The group is expected to leave for Germany on Tuesday. (August 19, 2003)

The German government has warned the 14 tourists released from kidnappers in the Sahara desert against profiting from their experiences there, saying they should give any money earned from their story back to the state. (August 24, 2003)

Kidnappers held Reto Walther and 13 other tourists hostage for over five months in the Sahara Desert until late August. In an exclusive interview with Deutsche Welle, Walther recalled his ordeal. (August 29, 2003)