The fighting in the south Caucasus may be coming to an end, but life in the region is unlikely to return to normal soon. If some get their way, the map could look very different to the one before the war began. 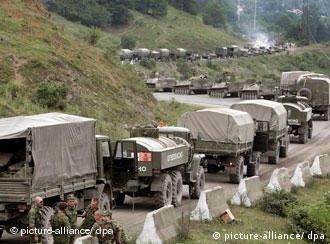 Georgian President Mikhail Saakashvili announced on Tuesday, Aug. 12, that he wanted to take his country out of the Commonwealth of Independent States (CIS), the Moscow-dominated regional grouping of ex-Soviet countries.

Addressing a 70,000-strong crowd in front of the Georgian parliament building in Tbilisi, Saakashvili said that Georgia would quit the CIS and urged Ukraine to follow suit.

"We have made a decision: Georgia is quitting the CIS," he told the crowd. "We urge Ukraine and other countries to follow our decision."

Saakashvili said relations with Russia were such that Georgia could no longer be part of the federation. The president claimed on Monday that Russia currently occupies "the majority" of Georgian territory, including the separatist provinces of South Ossetia and Abkhazia and neighboring areas.

In an outpouring of patriotism in the face of Russian attacks, Georgians of all ages crammed onto one of the main roads in the capital, where a sea of flags waved above the crowd and volunteers handed out free T-shirts saying: "We are together. We are united." 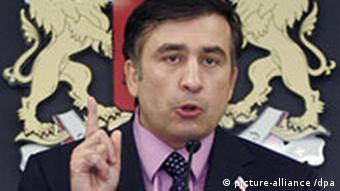 Saakashvili has tapped into Georgian patriotism

Saakashvili, standing in front of the parliament building, joined fellow politicians making rousing speeches, the crowd answering their calls for unity and courage with wild applause and cheering.

"The targets of the Russian armed forces are humanity and liberty!" Saakashvili said. "Our struggle with Russia is a struggle between David and Goliath. And David will win! We will win!"

People held banners and posters saying "Freedom" and "Stop Russia" and depicting tanks with a line through them.

Speakers denouncing Russia and its prime minister, Vladimir Putin, shouted "Georgia, Georgia!" Posters denounced Putin, the former president, as a terrorist, and one depicted him with the caption "Wanted: Crimes against humanity in the world."

Many observers predicted the war would undermine Saakashvili, with his opponents seizing on his hot-headed operation to retake South Ossetia as the catalyst for Russia's devastating response. Some expected the responsibility for the loss of life and destruction to be laid squarely at the president's door but in the immediate aftermath at least, the Russian decision to cease fighting has been seen by more patriotic quarters as a victory for the embattled Georgian leader. 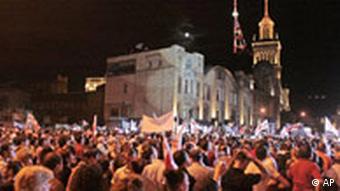 Patriotic Georgians have joined together in solidarity

However, with Russia stating that hostilities would resume should any further move be made against South Ossetia, Saakashvili still faces the problem of what to do about the breakaway region that Tbilisi -- and the rest of the world -- calls a part of Georgia.

Russian troops are to remain stationed in South Ossetia and Abkhazia, Medvedev told reporters on Tueday. He called the soldiers "the deciding factor for security in the Caucasus."

International Criminal Court Chief Prosecutor Luis Moreno-Ocampo said he has been contacted about the conflict in Georgia's breakaway province of South Ossetia and may launch a preliminary investigation. Putin had previously accused Saakashvili of genocide and crimes against humanist.

"We have started to receive communications on this," Moreno-Ocampo told Reuters news agency from The Hague. Asked if he would be launching a preliminary investigation, he said: "It is a possibility". He gave no further details.

If Russians have their way, South Ossetia will become part of their country, a survey conducted by independent pollsters Levada suggested on Tuesday.

Will the Caucasus map have to be redrawn?

Almost half of those polled want the breakaway Georgian region to join with Russia. Some 46 percent of respondents told Levada they wanted to see South Ossetia as part of Russia. Levada surveyed 2,100 Russians in large cities between Aug. 9 and10. Another 34 percent said South Ossetia should become an independent country, and only four percent said it should remain part of Georgia.

Another consequence of the fighting looks to be the breakdown in relations between NATO and Russia.

NATO: No business as usual with Russia

NATO ambassadors on Tuesday voiced serious concern at the situation in Georgia, with many nations saying it could not be "business as usual" with Russia, US NATO ambassador Kurt Volker said.

There was "serious concern about the events in Georgia," including the humanitarian situation, support for a ceasefire and the withdrawal of forces, Volker told reporters. "Given the events in Georgia, many allies expressed the sentiments that there cannot be business as usual with Russia," he said.

The ambassadors of the 26 NATO nations, meeting in Brussels, condemned Russia's "excessive, disproportionate use of force," Scheffer said. "That's why a ceasefire is of such importance."

Analysis: What the Future Holds for Russia and Georgia

Russian President Dmitry Medvedev has ordered his army to end its war against Georgia -- for now. Author and political scientist Stefan Wolff talked to DW-WORLD.DE about the conflict, its repercussions and the future. (12.08.2008)

Amid claims from both sides that fighting in the Caucasus continued despite promises to lay down their weapons, French President Sarkozy urged his Russian counterpart to follow through on an order to end military action. (12.08.2008)

DW-RADIO on Issues of International Law in Georgia