Goalkeeper Manuel Neuer has decided not to renew his contract at Schalke, likely signaling his departure at the end of the season. Bundesliga rivals Bayern Munich are the favorites to sign the highly coveted player. 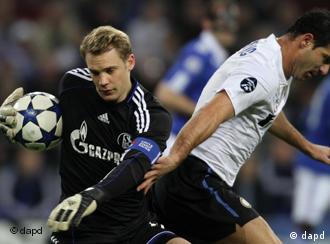 Schalke's prized goalkeeper Manuel Neuer has decided to test the transfer market and not renew his contract with the Bundesliga team.

"I made my decision without any influence from the outside," said Neuer on the club website. "The decision had nothing to do with a coaching change or a person at some other club. I want to keep the possibility of change open after 20 years of being true to one club."

Neuer emerged as one of Europe's top goalkeepers after an impressive showing for Germany during last year's World Cup in South Africa, a title he has cemented by leading the mid-table Gelsenkirchen side to their first Champions League semifinal berth this season.

Following months of transfer speculation and keen interest from Manchester United and domestic rivals Bayern Munich, it looks likely that Neuer will don red and white next season and sign with the Bavarians. Bayern have struggled to find a consistent replacement between the posts since the departure of Oliver Kahn in 2008.

Neuer's contract currently runs until 2012, meaning Schalke can claim a lucrative transfer fee rather than allowing him to depart for free. The 20-million-euro ($29 million) price tag estimated by local media would surely help debt-ridden Schalke resolve some of their financial woes.

As expected, Schalke fans have reacted with disappointment and hostility to Neuer's decision. The 25-year-old has been labeled a "traitor" and "Judas" by some fans on his Facebook page, which has amassed nearly 5,000 comments in one hour.

"We accepted this decision with a heavy heart and we must respect it," said Schalke sport director Horst Heldt. "What will happen now with Manuel will be decided in the coming weeks or months."

Soccer coach Frank Schäfer has announced he will step down from his post at Cologne at the end of the season, while Hoffenheim have just found a new man to take over at the helm next year. (19.04.2011)

Schalke sent UEFA Champions League title-holders Inter Milan packing from the competition with a 2-1 win at home. The Gelsenkirchen side now progress to a semi-final showdown against Manchester United. (13.04.2011)

One mistake by a young goalkeeper was all it took to turn Bayern ex-coach Louis van Gaal from a lame into a dead duck. But Bayern's troubles won't automatically end with his departure. (10.04.2011)