Germany's long-awaited open data portal govdata.de has opened for business. It follows similar moves in the US and UK. But how open is open data in Germany? Not very, say the net activists. 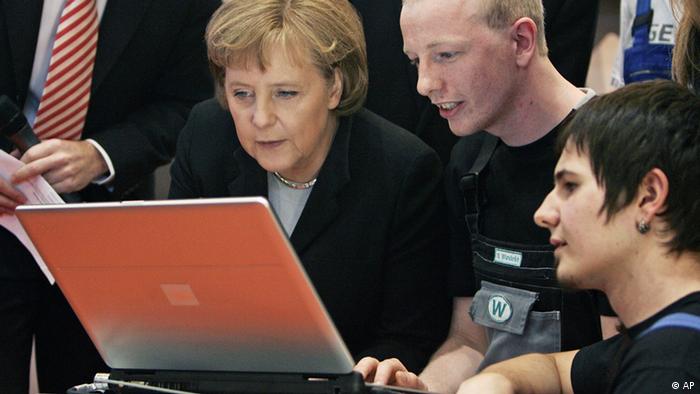 When Germany announced plans to launch an open data portal last year, internet activists and transparency advocates welcomed the move. They took part in workshops and advised the government.

The aim was to make various kinds of government data available to the public, seemingly for free.

"There are lots of data sets, which are paid for with taxes, paid by us, and which are lying in the databases of the government," says Markus Beckedahl, a founder of Netzpolitik, a blog for freedom and openness on the Internet. "For example, if you are moving to a new city and you want to find a new apartment or a house, you could have a data set on the water quality there and mix it with another data set on house prices, and visualize it on a map, so you could compare the best water quality and the cheapest rents."

That was the hope.

Then, just a few weeks before the launch of govdata.de this week (19.02.2013) many of its independent advocates withdrew their support.

They had hoped the platform would usher in an era of openness and transparency and exploit the Internet to maximize accessibility to government data.

But they say that is not what we've got.

In Germany, as in many other countries, official data is often published on various operated by the authorities. 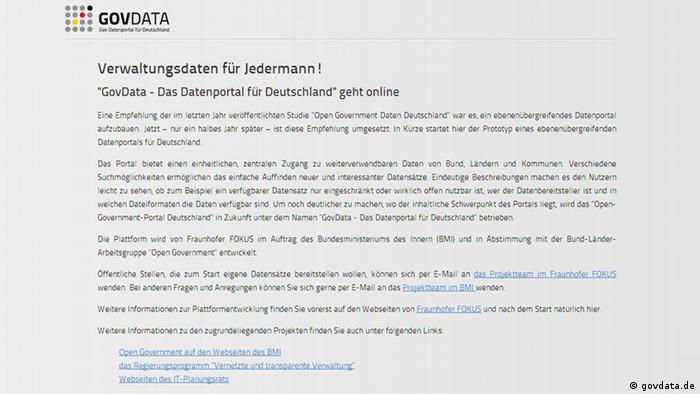 That is, if the data is released online at all. Most of it is only available upon request.

And this is why activists had called for a one-stop-site, where public information could be released - as it is in the UK and the US.

Christian Heise from the Open Knowledge Foundation had participated in the workshops to help design the project.

He was later among a group of 12 activists, who released a joint statement criticizing the government.

"During the last community workshop, we, the representatives of the open data community in Germany, realized that the platform would not be what we believe open government should be," says Heise.

Open up to a point

In that, Heise has the support of Beckedahl, another of the signatories.

"We are unhappy that the dialogue failed over the last two years, because we took a lot of time to talk to the government representatives and it looks like they didn't understand a thing," says Beckedahl. "There are clear definitions of open data, when it is really open, and other governments like the British one or the US government, they have shown us how to use open data in a really open way. But our government [have refused] to use these free principles of open data. They want to sell the data sets."

Unlike the US government's data.gov and the UK's data.gov.uk, Germany's govdata.de is not free.

And for many Internet activists that means that it isn't open.

But could govdata.de still prove to be a move in the right direction?

Christian Humborg, the head of Transparency International Germany, says it might - up to a point. 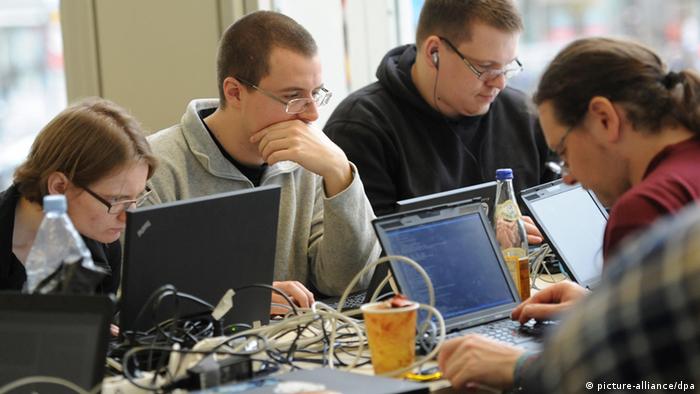 Net activists withdrew their support for govdata.de, saying it fails to represent their idea of open government

"Of course, anything like this is a step forward. The question is how big the step is. Unfortunately, I think it is a rather small step," says Humborg. "First of all, this started under the headline, open government, and right before the launch the word 'open' disappeared, which is disappointing. Second, we have to remember that we've just seen an initiative by the state of Hamburg in Germany to introduce a new transparency law, which requires from government to publish data in vast amounts."

Leading light of the north

Hamburg is in the vanguard: while the federal government's open data portal is entirely voluntary - meaning, authorities aren't forced to publish information in a manner that is open, accessible, and searchable - the city-state of Hamburg is doing it different.

"The developments in Hamburg are the most interesting because they are based on the law and the next two years will show how this law is implemented - I think it's a unique case worldwide of far-reaching open data and open government," says Humborg.

Most open data efforts in the US and the UK are voluntary. There are no legal requirements forcing the authorities to release information.

By contrast, the city of Hamburg's efforts to force regional government to release data may be linked to the importance it places on open data for business.

"At the moment, we are just speaking about transparency and transparency within the democratic process," says Heise. "But I think there is a big opportunity for start-ups and other businesses in using open data, too."

In Germany, the cities of Berlin and Munich have also launched open data sites in recognition of its potential for attracting investors.

Heise predicts that if the push for open data from the private sector increases, Germany's federal government will have to come up with an open data platform that is truly open.

On December 11, Linux 3.7 was released, bringing with it additional advantages. The explosion of web platforms and business is in part due to Linux and the push to develop open source software. (12.12.2012)