A small herd of European bison have been returned to the wild in a remote corner of the Czech Republic, the latest chapter in what is an amazing reversal of fortunes for Europe’s largest mammal. 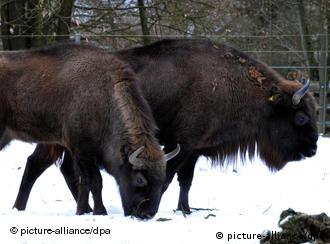 Hunted virtually to the point of extinction, in recent years European bison have made something of a comeback. In the Czech Republic, they're grazing on what used to be a military training ground last used by the Red Army.

"I suppose it is rather ironic," said Jiri Janota, head of the Czech Defense Ministry's Military Forests and Farmland Department.

Janota is a no-nonsense military man with a firm handshake. One senses he has little time for journalists from Prague, who come ill-equipped for wading through nettles and tall grass to reach the small herd of bison he personally oversees at the Ralsko Nature Reserve, about 100 kilometers northeast of the capital.

"Disused army training grounds often boast some of the best-preserved natural environments in the country, because for decades they were closed to the public," Janota said, keeping his voice low in order to avoid scaring the animals munching on the grass behind him. 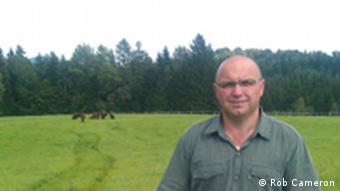 Jiri Janota is in charge of the bison program

The reserve was military training ground from 1968 to 1991. But it was converted into a natural reserve in 2000. Janota says that today, you'd never know troops once held exercises here.

The meadow is bordered on three sides by a sturdy wooden fence and on the fourth, by forest.

The protected enclosure is designed to allow the animals to acclimatize before they are released to roam freely through the huge Ralsko reserve, which covers an area of about 250 square kilometres, and is also open to cyclists and hikers.

The animals grazing here are European bison, or Bison bonsasus, sometimes also known by their old Germanic name Wisent. They're slightly taller – and a bit balder – than their shaggy American counterparts, Bison bison.

They haven't been seen in these parts for 200 years. They were hunted to extinction by the beginning of the 19th century for their meat, shaggy coats and horns. The species was reintroduced earlier this year, and the original herd of five cows and a bull soon produced two calves. 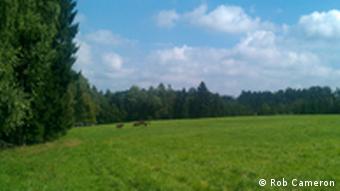 The Ralsko bison enclosure is bordered by a forest

"They're certainly not dangerous. They'll always run away, and, to be honest, they'll hear you long before you see them," Jiri Janota stated.

The department placed information notices at every entrance to the reserve, explaining what people should do if they come across a bison. Visitors are advised to steer clear of males during rutting season.

Protected by both Nazis and Soviets

The bison in the Ralsko herd are originally from Poland, which is home to a successful breeding program.

Once they'd been hunted to extinction elsewhere on the continent, Poland was home to the very last wild bison in Europe, until a Polish poacher shot the very last one in 1919.

In 1929, two cows and a bull from zoos in Sweden and Germany were brought to a Polish breeding station, and were protected – even during the World War II – by both the Nazis and the Soviets.

After the war, they were reintroduced to the wild at Poland's Bialowieza National Park. Since then they've gradually been returned to forests all over Eastern Europe.

The bison program, however, is just one part of Ralsko's recovery from its centuries-old history as a military training ground.

A derelict brick structure, built by the Russians, stands on the reserve.

"This building was used by the Red Army as a dry cleaning facility," said Petr Kvapil. He heads up a program that uses nanotechnology to clean the groundwater of tetrachloroethylene, a chemical used for cleaning fabrics.

"They used to clean the soldiers' uniforms of oil, and just let the chemical waste sink into the ground," he said.

Carcinogenic Tetrachloroethylene, an inorganic material, is water-soluble enough to be dangerous.

"It can contaminate a really huge volume of water, and here at this site, we are in one of the most important underground aquifers in the Czech Republic," Kvapil said. 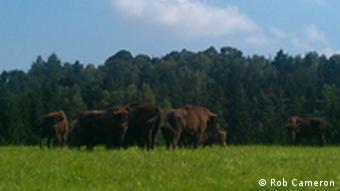 Of course, preserving the aquifer is also important for the European bison, as the entire ecosytem must remain intact in order to support them.

Ralsko has served its military purpose. The Cold War is over, the Russians are gone, and Czechs are slowly reclaiming the land as their own.

In the process, they're donating part of it to one of Europe's most beautiful mammals.

A new study has found that about 8.7 million different species live on earth, but less than one-fifth of those life forms are known to science. (23.08.2011)

Wolves, otters, bison and wildcats are some of the main attractions in Germany's recently-proclaimed UNESCO world heritage beech forest in Hesse. The forest is proving an especially big attraction for children. (04.08.2011)

While zoos are being recognized as key centers for conservation, the impact of climate change has brought some experts to the conclusion that more radical solutions are needed to save vulnerable species. (30.04.2011)