NATO unity threatened by defense budget and equipment shortfalls | World| Breaking news and perspectives from around the globe | DW | 03.03.2010

NATO currently faces one of its biggest challenges away from the battlefield as concern about the budget shortfall which is plaguing the North Atlantic Treaty Organization threatens to drive a wedge between its members. 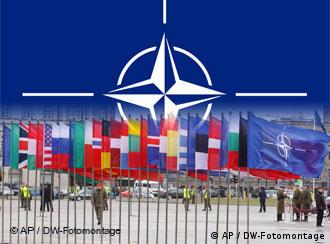 US Defense Secretary Robert Gates accused European countries of failing to provide enough weapons and equipment to NATO's missions in Afghanistan and around the world last week, saying that there had been too much demilitarization since the end of the Cold War and that Europe's contribution to underfunded defense budgets is undermining NATO's shared security goals.

NATO's 2010 budget shortfall has already reached hundreds of millions of euros, even though the year is less than three months old. That, Gates said, was a "natural consequence of having underinvested in collective defense for more than a decade."

"Since the end of the Cold War, national defense budgets have fallen consistently - even with unprecedented operations outside NATO's territory over the past five years," Gates said, adding that the budget shortfall represented a symptom of "deeper problems" with how NATO sets priorities and how European societies perceived the role of the military.

NATO Secretary-General Anders Fogh Rasmussen defended Europe's contribution, specifically to the international force in Afghanistan, saying that NATO's European members had responded to President Barack Obama's call for more troops and currently account for 40 percent of the force of over 100,000 soldiers.

Fogh Rasmussen admitted, however, that the "growing discrepancy" between the United States and NATO's European allies was a potential problem.

Dr. Karl-Heinz Kamp, the director of the Research Division at the NATO Defense College in Rome, gave Deutsche Welle his personal opinion of the situation. 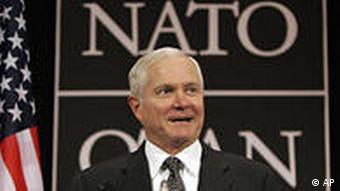 "I was in Washington and it was indeed a very tough speech by the secretary of defense," Kamp said. "However, he has a point, as NATO has a long-standing self-obligation for all members to spend at least 2 percent of their gross national product (GNP) on defense. Currently, only five of 28 members fulfill that obligation."

"Most of the European defense budgets are in freefall, given the long term effects of the financial crisis. Still, I would not say that Europe is 'averse to military force' as the European allies and many European non-NATO members provide thousands of soldiers in Afghanistan."

"The issue is not just about what is stopping European nations from contributing to NATO but what is stopping them from creating more deployable forces full stop," Prof. Sven Biscop, the director of the Security & Global Governance Program at the Royal Institute for International Relations in Brussels, told Deutsche Welle.

"There is also the problem that European defense budgets are increasingly being spent on maintaining armies, on paying overheads, and not on development."

Europe still racing to catch up with post-Cold War reality

Gates said that European members face more "diffuse" threats from extremists based in failed states pursuing weapons of mass destruction and from "rogue nations" such as Iran, armed with ballistic missiles that could strike Europe. He said that Europe had yet to fully adapt to the new realities of the Cold War era.

Kamp agreed that the end of the Cold War had presented NATO, and its European members specifically, with a new defense dynamic which the organization had struggled to adapt to quickly and effectively. 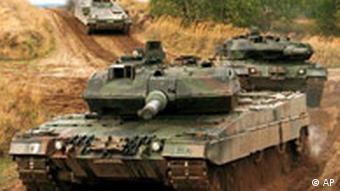 Europe no longer faces the threat of conventional warfare

"To fundamentally alter the structure of military forces takes many years, particularly for armies that have been optimized for decades for one single scenario, namely that the Cold War could become a hot one," he said.

"Much is made of the fact that very few NATO members have met the GNP target but what is more important is the fact that only 30 percent of European forces are capable of being deployed in an expeditionary context," Daniel Korski, senior policy fellow at the European Center for Foreign Relations, told Deutsche Welle. "This and the other problems mentioned by Gates have been lacking for years because European governments have been reluctant to do anything about it."

As well as questioning Europe's attitude toward military operations and the continent's threat perception, Gates highlighted the problems arising from the shortfall in heavy equipment and hardware which he claimed complicated efforts to stage joint military operations in Afghanistan and elsewhere.

The shortage of helicopters and cargo planes was "directly impacting operations in Afghanistan," he said, adding that NATO also needed more aerial refueling tankers and unmanned aircraft for surveillance and intelligence. 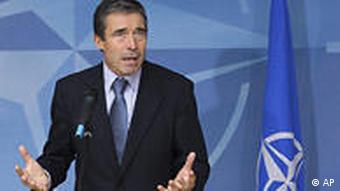 Fogh Rasmussen heads NATO at a critical time in its history

"The answer to the question on whether European nations actually have any more to give in terms of hardware and personnel is no, not in any significant numbers," Biscop said. "The troops and equipment which have already been made available to NATO are pretty much all there is."

"Of course you can scrape the bottom of the barrel for more in an emergency but if there was to be a big demand suddenly, for a new mission, then it would have to be a very short mission or others would have to be down-sized. NATO would have to draws troops from other theaters to cope."

"The question is much less of the quantity of equipment and personnel but of the quality," Dr. Kamp said. "Europe has about two million men under arms but only 3 to 5 percent of them are deployable in combat. This is an incredible mismatch."

"Some European NATO members spend more than 60 percent of their scarce defense budgets on personnel costs - with the result that hardly anything is left for defense investments to close the gaps currently visible in Afghanistan in relation to helicopters, intelligence, strategic transportation etc."

Talk of crisis presents NATO with opportunity to adapt 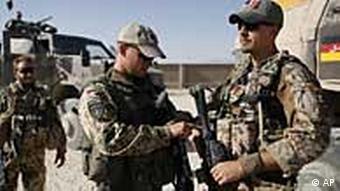 Any new mission would have to take troops from existing ones

With the future of NATO's crisis management being debated at a seminar jointly held by the Finnish and Swedish governments on Thursday and a document mapping out a new strategic vision for the alliance due to be presented at a NATO summit later this year, some believe NATO is entering a phase where it needs to address its biggest crisis of confidence in decades or face even greater problems in the future.

"Crisis is a term NATO is very much used to but I would not call it a crisis this time," Kamp said. "Afghanistan puts NATO in a very difficult situation but the overall transatlantic climate is much better than a couple of years ago."

"With France returned to almost all NATO structures and a US administration which does not see the European efforts for a defense identity as a threat but as a chance, many of the useless transatlantic fights of the past have become history."

"What NATO needs to figure out is a new 'Transatlantic Bargain,' a mutual understanding of what both sides can expect from each other and what each side is willing and able to fulfill," he added.

A withdrawal of Dutch troops from Afghanistan would certainly increase the pressure on its allies to take their place. But it is unlikely to trigger a domino effect among other countries who have troops there. (23.02.2010)

After the surge: which way forward for the NATO allies?

US President Barack Obama says he hopes western allies will commit around 10,000 soldiers to Afghanistan to boost the US presence there. However so far such pledges have been few and far between. (02.12.2009)

Amid birthday celebrations, NATO faces challenges of a changing world

As NATO prepares to celebrate its 60th birthday, it may want to wish for a return to simpler times as it blows out its candles. A changing world of new threats and challenges means no one will be putting their feet up. (02.04.2009)