NATO stands by Turkey after jet downed by Syria

NATO chief Anders Fogh Rasmussen has expressed the alliance's solidarity with Turkey following the downing of a Turkish aircraft by Syrian forces on Friday. NATO countries had met in Brussels to discuss the incident. 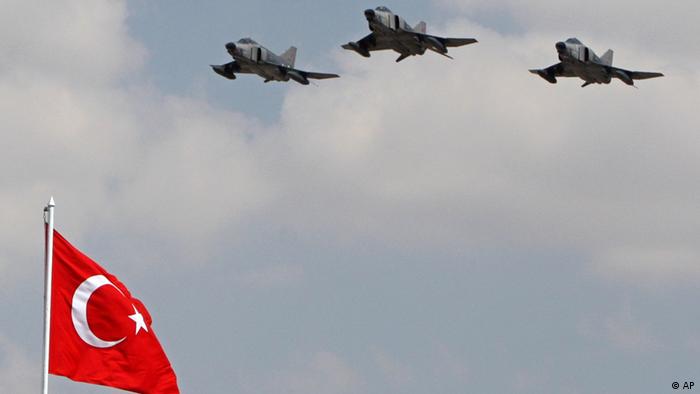 Addressing reporters in Brussels, Rasmussen said the NATO members condemned the incident "in the strongest terms."

"What we have seen is a completely unacceptable act," he said, "and I would expect Syria to take all necessary steps to avoid such events in the future."

At Turkey's request, NATO held the emergency meeting under Article 4 of its charter. It is only the second time in NATO's 63-year history that it has convened under Article 4, which can be invoked when a member state feels its territorial integrity, political independence or security is under threat.

Turkey has said the fighter jet, which was on an unarmed training mission, was shot down a mile (1.6 kilometers) inside international airspace. The plane inadvertantly entered Syrian airspace for a short time before it was shot down. Turkey has said both pilots are still missing.

Syria, meanwhile, has defended its actions as an act of defense, insisting the plane was inside Syrian airspace.

On Tuesday, Turkish Prime Minister Recep Tayyip Erdogan said in an address to parliament that Friday's incident was a "heinous attack," and that Turkey would not hesitate to use force in response to any incidents in the future.

He noted that five Syrian aircraft had entered Turkish airspace recently but Turkey had not responded. This would not be the case in the future, he said, as aircraft from Syria on the Turkish border would not be "considered a threat and treated as a military target."

Arinc did not specify when the incident occurred and whether the plane had been hit. He said it had been searching for the two missing pilots of the F4 Phantom jet.