Several ethnic armed groups have met in northeastern Myanmar to discuss an end to the conflict in the region. Meanwhile, rebel representatives have also met with the government in a bid to finalize a ceasefire accord. 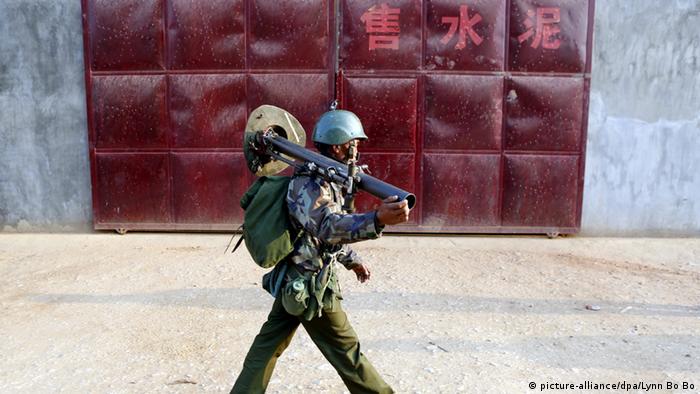 The meeting was held in the regional capital, Panghsang, which is the stronghold of the powerful Wa group.

It's the first time the Wa have hosted such a meeting in their capital.

Elsewhere, around 50 representatives from 12 ethnic armed groups also hoped to finalize a nationwide ceasefire agreement with the government.

Divisions in a complex conflict

Violence in nearby Laukkai region, close to the Chinese border, had seen hundreds killed or displaced in fierce clashes between Kokang guerrillas (Kokang soldier pictured above) and government troops since February.

The government's continued conflict with the Kokang had seen the ethnic alliance distrust the sincerity of President Thein Sein's regime.

Neither the Kokang nor their Wa hosts took part in the government talks, but both attended Friday's consultations.

The government had strongly opposed the participation of the Kokang, however, leaders of the United Wa State Army invited the guerilla faction, according to AP.

He said all ethnic minorities want peace, and to build a prosperous and developed nation, but communities had suffered because of the more than 50-year conflict.

"We will discuss issues relating to peace and stability in ethnic regions. We want peace in the ethnic regions because development cannot be achieved without stability," Chan added.

Government peace negotiator Hla Maung Shwe said, "I believe that the Wa leaders will help find a way to end the conflict in its region - especially the ongoing conflict between the government and Kokang rebels."

President Sein had secured a draft deal with 16 rebel groups last month to end decades of fighting, described by the United Nations as a "historic and significant achievement."