Music Fans Should Mourn the Final Demise of Kraftwerk

After co-founder Florian Schneider's departure from Kraftwerk, DW-WORLD's Jefferson Chase muses about a group that meant far more to pop music than most casual listeners realize. 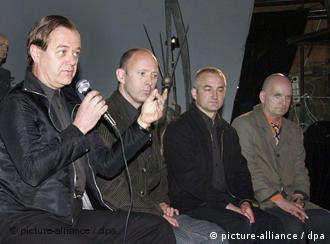 Schneider, extreme right, was a key part of Germany's most important band

There are plenty of reasons not to care about Florian Schneider leaving Kraftwerk.

The group made its last proper record in 1986 -- and its last great one in 1981. Since then, it's been mostly remixes and one-off jingles, with Schneider declining to take part in tours.

Indeed how much, one might ask, can the absence of one human being matter in a band whose members posed as robots and used puppets and play-backs for their live performances?

But, in the end, I think Schneider's decision to officially hang up his circuits and knobs probably matters a lot.

Kraftwerk are, by far and away, Germany's most important contribution to modern popular music. That's because, in the words of former percussionist Wolfgang Fluer, the founding members set out to capture what they thought their home country would sound like, rather than create a German take on Anglo-American pop music.

Their strategy for doing so was to combine a German fascination for and skill at using technology with a form reminiscent of the string quartet -- both Schneider and Kraftwerk co-founder Ralf Huetter came from classical-music backgrounds.

1970s West Germany was a country that was both scarred by the sorrows of World War II and buoyed by the possibilities of a society where large parts of the past had been destroyed.

Kraftwerk's music captured this unusual combination of feelings in a variety of contexts. Their breakthrough 1973 album Autobahn celebrated the joys of mobility while subtly recalling the dark origins of Hitler's highways.

People only passingly familiar with Kraftwerk think of them first and foremost as pioneers of electronic music, specifically synth-pop and techno. They overlook the fact that the group wrote more than their fair share of universally catchy, at times stunningly moving melodies.

Take, for example, "The Model." On first listen, the 1978 Kraftwerk original sounded like satirical ditty with a danceable beat about the cult of beauty. But it also contained a wistful nine-note central theme, whose profound sadness only became fully apparent when covered in 1992 by the classical Balanescu Quartet.

Or listen to "Computer Love" -- an homage to and melancholic reaction against electronic amor whose melody was so great not even Coldplay could ruin it when they appropriated the tune for their 2005 song "Talk."

Kraftwerk were unlikely to ever reach those heights again, and Schneider's departure is almost certainly the final nail in the creative coffin.

Huetter will continue to tour under band's names this year, opening up for Radiohead, one of approximately one billion bands that would not sound the way they do, had Kraftwerk never plugged in a Moog synthesizer.

There's something heartening about the thought of some people discovering for the first time the music of this unique group. And something sort of sad about the fact that Kraftwerk, like the 1970s West Germany from which they emerged, are now truly history.

The co-founder of the German electronic music band Kraftwerk has quit -- but the tour with Radiohead will go on. (07.01.2009)