Indian authorities have arrested a nun and an employee at a home run by Mother Teresa's charity after they allegedly sold a baby. Investigators say they are looking into several more complaints of child trafficking. 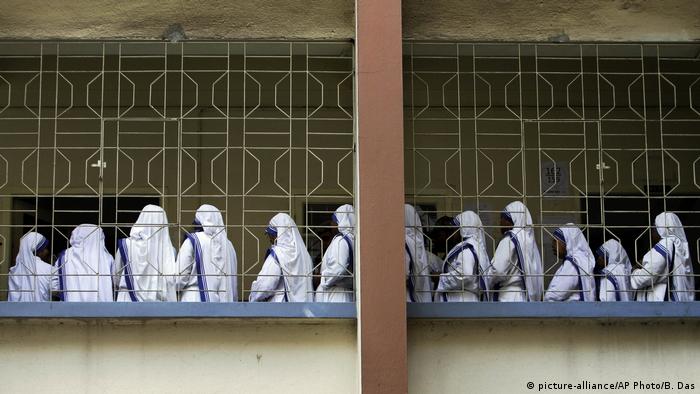 Police said Thursday they had taken two people into custody for allegedly selling infants from a shelter for unwed mothers in eastern India.

The facility in Jharkhand state is operated by Missionaries of Charity, a religious order founded by Mother Teresa in 1950.

"They have said that at least five to six babies have been sold to childless couples," police officer Aman Kumar told the Thomson Reuters Foundation.

"We are investigating to see how the operation was run and how many more children have been given away in the last few years."

Police made the arrests after an Indian couple claimed they paid 120,000 rupees (€1,504; $1,760) to a staff member in exchange for a baby boy born to one of the home's residents. The couple came forward after the worker allegedly took the baby back and kept their money.

A Missionaries of Charity spokeswoman quoted by the Associated Press said the order had stopped giving children up for adoption three years ago and had never taken money from parents.

Police official Kumar said 100,000 rupees was recovered from the two who were arrested.

Arti Kujur, head of the Jharkhand State Child Protection Society, said his organization had received many complaints about the home, adding that the problem is likely more widespread.

"We hear that babies are being sold in other homes as well and are determined to put a stop to it," he said.

Since it was founded over 60 years ago, Missionaries of Charity has set up hundreds of shelters to care for the most vulnerable, including unwed mothers, prostitutes, lepers, street children and the mentally ill.

Mother Teresa received the Nobel Peace Prize for her charitable work in 1979 and Pope Francis declared her a saint in 2016.

Mother Teresa has been made a saint by Pope Francis. Though Germans who spoke to DW lauded the move, many acknowledged that her relevance has faded somewhat with time. (04.09.2016)

Pope: 'She bowed down before those who were spent'

Francis has proclaimed Mother Teresa of Calcutta a saint just 19 years after her death. Teresa's canonization was a high point in this Holy Year of Mercy - and not just for Catholics, Christoph Strack reports from Rome. (04.09.2016)