The Bolshoi Theater in Moscow, one of the most the legendary in the world, is soon to reopen after six years of reconstruction, as well as claims of embezzlement. Dancers and Muscovites alike are getting impatient. 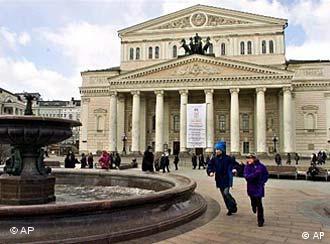 The facade, pictured before reconstruction, hasn't been significantly altered

The morning sun shines through the windows of the training room, illuminating countless marks on the grey linoleum floor. They are relics of thousands of jumps and landings of the ballet dancers at the Bolshoi Theater in Moscow. Around 40 dancers, both male and female, are having their morning rehearsal. For most of them, it is just the start of a long day at "the Bolshoi," as it's known here.

The Tsars loved it, so did the Soviet leaders and so do both Muscovites and foreign visitors. Even though the Marinskiy Theater in Saint Petersburg has been challenging the Bolshoi for decades, the Moscow theater remains a symbol of Russian classical culture abroad. Here, Tchaikovsky's "Swan Lake" premiered in the 19th century and classical performances are its trademark. 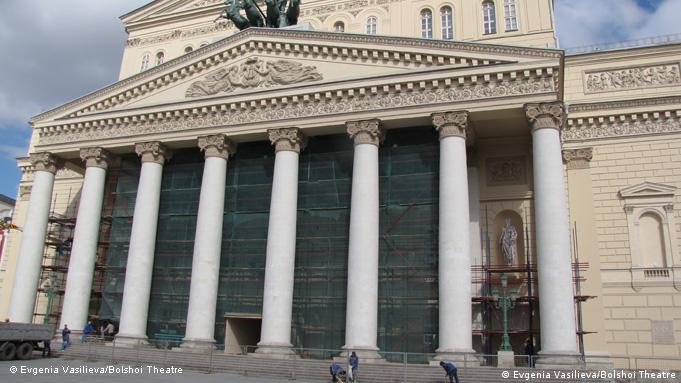 The theater has been a construction site since 2005

However, for more than six years those who went to the Bolshoi had to watch performances on a small stage, called the New Stage. The legendary historic building has been undergoing reconstruction since 2005: It was close to collapsing, experts said. But the renovation and restoration process was rocky. Costs rocketed up to a billion euros and there were not only huge delays, but also embezzlement claims in the millions.

The dancer with the highest rank in today's class is 26-year-old Anna Nikulina, a slender, pale, dark-haired woman with a ponytail, who joined the Bolshoi eight years ago when the main building with the so called big, historical stage was still open.

"You just can't compare the two stages," said Nikulina, who dances leading roles as a first soloist. "The smaller stage is like any other theater in the world and it's much smaller, but the big stage has a certain aura.”

Reconstruction by the state

The New Stage, on which Anna Nikulina and the other dancers have performed since 2005, was built in 2000 adjacent to the historic building. Both complexes stand just across from the Kremlin on the so called Teatralnaya Ploshad, the theater square.

For years, the historical theater's beige façade with its pompous columns and the green chariot was hidden by a scaffold. "There were delays of up to four years when we took over in summer 2009," said Mikhail Sidorov, spokesperson for the investment group Summa Capital.

So painful and worrying was the subject of reconstruction of the Bolshoi that in 2009 President Dmitry Medvedev took the construction site under his personal control and founded a commission to oversee it.

"Since then, the coorporation of all stakeholders involved has improved a lot," said Sidirov. These days, however, the scaffold is gone and the Bolshoi has been taking shape again - also from the inside. 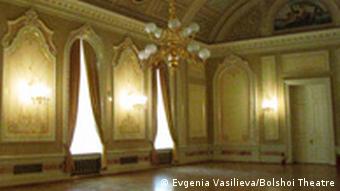 Much of the theater is still off limits to the press

The auditorium itself is nearly complete. According to Russian media reports, about 4.5 kilograms of gold leaf were used to gild the stucco auditorium. The centerpiece is also in place: The massive crystal chandelier has been renovated meticulously for over two years, staying true to its historic appearance.

"The chandelier is like a symbol of the Bolshoi," said restaurateur Yevgeniy Vasilyev. "Whenever I told my friends what I was working on at that moment, they were proud of me."

However, while the restaurateur of the chandelier can lean back and wait for the grand opening ceremony in October, others still are facing a lot of pressure.

The orchestra pit, which can be moved up and down, is also about to be finished. The stage area, however, has been closed off to the press with a steel curtain for quite some time. 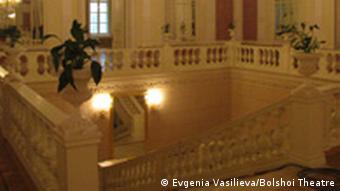 The halls will soon be filled with culture lovers

Among those who still have work to do at the theater is German engineer Moritz Dietrich, who works for a Russian contractor and is responsible for laying out the floor on the stage.

"On the one hand, it is a very prestigious contract with high-quality requirements, with the best wood in the world," he said. "But on the other hand it is really hard to fulfill these high standards and our own: There are so many people and projects here, so many things block our work."

Officially, his company's contract end in August, but he said he wasn't able to predict whether they would finish on time.

Meanwhile, the ballet dancers are not only rehearsing for the grand opening in October, but also for the new season, during which they will dance on both the New Stage and the larger, restored one.

"There will be more performances, which means that more people in the company will be busy," said dancer Anna Nikulina. She knows she's not the only one looking forward to the reopening. "Hopefully, than the fight for parts will calm down a bit. At the moment we clearly don't have enough ballet performances."

The Bard has arrived in a small, impoverished town in eastern Hungary. Organizers hope Shakespeare's universal allure will draw tourists to the region. (13.07.2011)

On stage, inmates perform for a society they cannot otherwise participate in. The Berlin theater company aufBruch, currently staging a production of "Don Quixote," has been putting on shows with prisoners for 13 years. (12.07.2011)

Star soprano Netrebko picks up two sidekicks for the summer

Anna Netrebko is a brilliant singer. Not only beautiful, she's also a star in the opera world and beyond. Now, she's kicking off a summer tour with a bass-baritone and a tenor at her side. (07.07.2011)