Moscow protesters return for anti-Putin rally | Europe| News and current affairs from around the continent | DW | 24.12.2011

Tens of thousands of people have filled an avenue in Moscow to protest against the alleged rigging of parliamentary polls in a new challenge to the authority of Russian strongman Vladimir Putin. 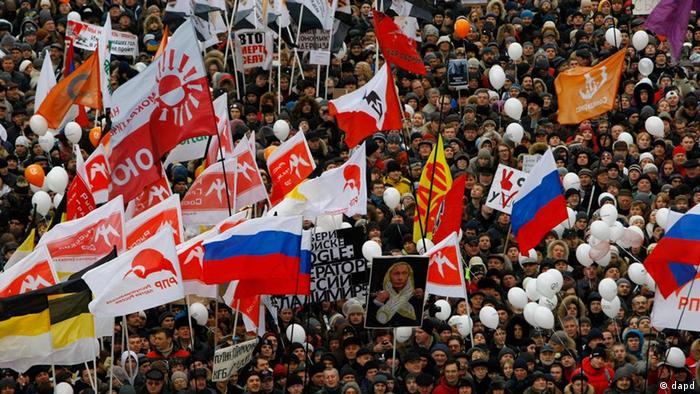 The protests in Russia over disputed elections continue

Clutching white balloons and banners with the slogan "For Free Elections", tens of thousands of protestors thronged Sakharov Avenue in Moscow, symbolically named after the Nobel-winning dissident Andrei Sakharov who for years defied the USSR.

Police said at least 28,000 people had turned out for the Moscow rally on Sakharov Avenue, which was closed off to traffic for the protest. Organizers put the number at 120,000.

The protests - which come after reforms promised by President Dmitri Medvedev - have also put pressure on Vladimir Putin to implement radical changes in Russia's tightly-controlled political system as he plans to return to the presidency in March elections after his four-year stint as prime minister.

The last Soviet leader, Mikhail Gorbachev, called on Putin to heed protester demands and quit politics instead of seeking a third term as Russian president.

"I would advise Vladimir Putin to leave now. He has had three terms: two as president and one as prime minister. Three terms - that is enough," Gorbachev told Moscow Echo radio in an interview on Saturday 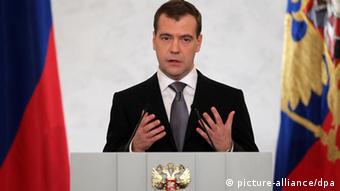 Medvedev has pledged reform, but experts are skeptical

In a major speech this week, Medvedev promised reforms that would ease the Kremlin's grip on power, including the reinstatement of elections for regional governors and a simplification of the process to approve political parties and presidential candidates.

In his last state of the nation address to parliament as president, Medvedev said he had heard the "call for change." It remained unclear, however, when the changes would be put into place.

"In his speech, Medvedev went further with democratic reforms than we've seen in the past," said Jens Siegert, the head of the Moscow office of Germany's Heinrich Böll Foundation. "This is clearly a reaction to the protests."

Siegert doubts, however, that these promises are much more than the lip service of a lame-duck president whose days in power are numbered. Cornelius Ochmann, an expert on Eastern Europe at the Bertelsmann Foundation in Berlin, is also skeptical.

"Content-wise Medvedev's speech is good, but it unfortunately comes too late," Ochmann said. "Today almost no one was listening to him. Everyone is looking at Putin."

Despite Medvedev's promises, there's no indication that the protesters' main demand - for elections to be held again - will be met. The central election commission in Moscow said only the results in 21 of more than 90,000 polling stations would be canceled due to violations. 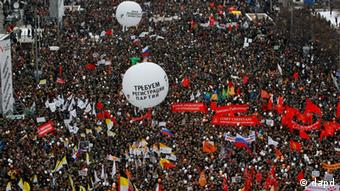 Organizers were looking for over 80,000 people to show up

According to official results, United Russia, the party of Medvedev and Putin, won 50 percent of the vote and an absolute majority in parliament. The new parliament met this week for its first session.

Observers suspect that the Russian authorities will make small concessions to the protesters with the hope that, eventually, their endurance will wear out. Many have noted how calm the situation in Moscow has been and that the Kremlin has allowed the demonstrations to take place without the police beating up the protesters like they usually do: Even state television, which usually tows the party line, has reported on the rallies.

Many in Moscow believe that the Kremlin is counting on the coming holidays to take the wind out of the protesters' sails. Between New Year's Day and the Orthodox Christmas in early January, many Russians will take vacation, which could affect the number of people who are willing to demonstrate.

Those in power also seem to assume that the fighting within the protest movement will keep it from taking off. Just ahead of Saturday's rally, illegal recordings of telephone conversations surfaced in which opposition leader Boris Nemtsov badmouths his colleagues. He has since apologized, but says that the recordings were released with the sole intention of undermining Saturday's protest.

The publication of an opposition leader's tapped phone calls, laced with profanities, threatens to undermine the Russian protest movement. But oppositionists say they are stronger than ever. (20.12.2011)

Russian President Dmitry Medvedev has pledged up to 20 billion euros to bolster the eurozone currency, but he is still not willing to hear EU criticism of alleged Russian rights violations in the country's last election. (16.12.2011)

Thousands take to the streets of Moscow