More help on the way for thalidomide victims?

German company Grünenthal and its drug thalidomide caused one of the biggest scandals in the history of medicine. Victims are still struggling today with the consequences, and a new study highlights their need for help. 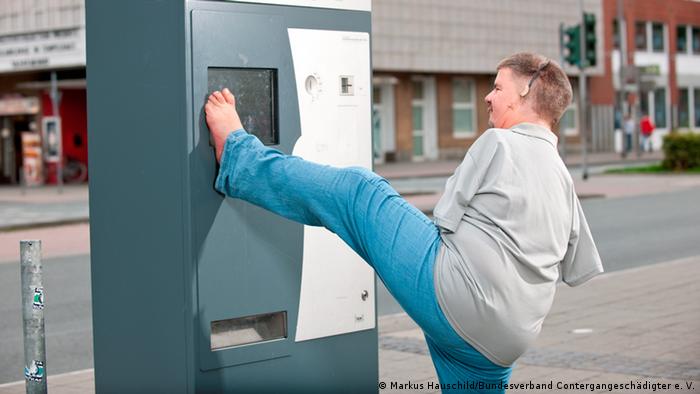 At the end of the 1950s, thousands of pregnant women took the tranquilizer thalidomide, marketed in Germany under the name contergan as a treatment for morning sickness and produced by the Aachen-based company, Grünenthal. The drug's side effects were disastrous for around 10,000 children.

"The parents in Germany who sued reached a settlement with Grünenthal of around 100 million Deutsch marks, which were paid into a foundation," said Andreas Meyer, who is a thalidomide victim and member of a thalidomide lobbying group.

But when that case went to court, Meyer added, the parents were still so occupied with their own concerns that they weren't in a position to plan for the long term.

"Of course, the company Grünenthal was counting on that. They shamelessly exploited the situation and pushed the responsibility off on the public at large. Now taxpayers bear the brunt in the form of thalidomide pensions and other social welfare benefits," Meyer explained. 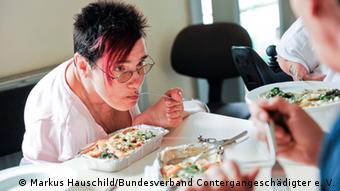 Lacking arms and hands, some are forced to use their feet to eat

"The low pensions do not suffice for a suitable standard of living. Victims also repeatedly have to register their need for support with the state authorities," said Christoph Lechtenböhmer, a psychologist and thalidomide victim. "When you have a victim, you have to find some way of compensation - and not by making proposals, but by making direct payments. Everyone must have a reasonable standard of living from it."

For decades the thalidomide victims' association has lobbied for more financial support so that those affected by the drug can make do in their difficult daily lives. 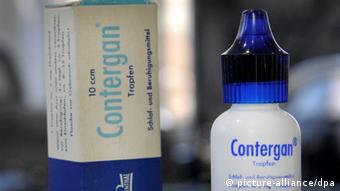 Thalidomide was marketed in Germany as contergan

Since victims claim their pensions are too low, a multi-party initiative in the German parliament worked together with those suffering from the drug's effects to commission a study on how much aid victims need. Four years later, an interim report from the University of Heidelberg's Institute of Gerontology has found that thalidomide sufferers face a drastic care deficit.

In addition to the severe health problems some victims face, "decades of strain on the spine, joints and musculature are creating additional problems just now being seen, leading to an increased need for care and therapy that goes well beyond what others in their age group require," wrote the authors of the study.

Ilonka Stebritz, a speaker for the thalidomide victims' association, can confirm the findings first-hand. "If a person who has no arms and must eat and write with his feet, has pain in his hip or knee, then it's simply impossible for him to perform these movements necessary for getting through daily life. We also use our teeth for a lot of things: For instance, I open bottles with them and raise the blinds. That's why we need implants, but these are not covered by insurers," she said. 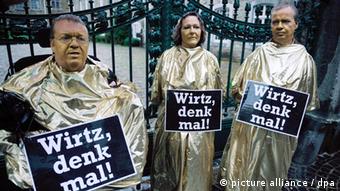 Protesters at the unveiling of a thalidomide monument

The worries of aging are compounded for thalidomide sufferers, and many of those afflicted say they simply don't have enough money for the therapy, aid, care and mobility that they need. The University of Heidelberg researchers catalogued 13 recommendations for assisting the victims.

The foundation for thalidomide victims commissioned an additional study that claimed victims in other countries receive much better support. In Great Britain, for example, the most severely afflicted receive payments totaling about 62,000 euros ($78,800), while comparable victims in Germany receive just about 6,000 euros per year. Ilonka Stebritz believes that, in light of both studies, the German government will be forced to re-evaluate its policies and increase payments to sufferers.

However, victims say they don't count on getting any additional help from Grünenthal, the German company that manufactured thalidomide. Earlier this year, Grünenthal was criticized by victims for unveiling a small statue to serve as a memorial - victims dismissed it as a trivial PR gesture intended to conceal the fact that the company isn't doing enough to assist them.

Grünenthal's management issued a statement saying the company regrets the suffering the drug has inflicted and expresses deep sympathy for those affected as well as their mothers and families. It went on to say that the company has observed "the physical damages as well as the emotional stress faced by victims, their families and especially their mothers." However, there was no mention of offering financial aid.

Soon, the company will be back in court due to a lawsuit filed by victims in Australia. Lawyers serving clients affected by thalidomide say that upon reviewing their archives, they've found new reasons to believe the company could be guilty of negligent assault and manslaughter.

After more than 50 years, German pharmaceutical company Grünenthal has made apologetic remarks on the scandal over its drug thalidomide. Those born with birth defects resulting from the drug demand more than words. (02.09.2012)

Grünenthal, the company that made thalidomide, a drug that left thousands with birth deformities, has begged for forgiveness. It is the first time the firm has apologized since the drug was banned more than 50 years ago. (31.08.2012)