Residents of the tiny principality of Monaco bid farewell Friday to Prince Rainier III, who ruled the state for 56 years. Rainier will rest beside his wife, Grace Kelly who died in a car accident in 1982. 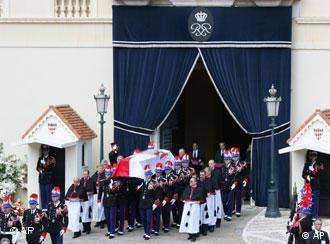 Rainier left his palace for the last time on Friday

In spring sunshine a crowd of several hundred watched uniformed members of the royal guard carry Rainier's bier through the black-draped palace gates and along the 200-meter route -- across the palace square and down a narrow side street -- to the Cathedral of St. Nicholas.

A cannon fired from a fort overlooking the harbor, slow bells chimed and a band played a funeral match to the beat of muffled drums. A line of Penitents -- members of a Roman Catholic order dressed in white and black robes -- accompanied the coffin, which was covered with a Monegasque banner. 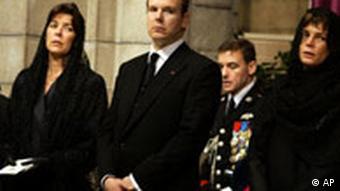 Leading the mourners were Rainier's three children by the US actress Grace Kelly: Caroline, Albert, who has succeeded him as prince, and Stephanie. Caroline's three elder children Andrea, Charlotte and Pierre were also at the head of the procession.

Wreathes of flowers covered security barricades and were arranged over the steps of the white 19th century cathedral, which stands high on the edge of Monaco's old quarter with a stunning view over the Mediterranean Sea.

A descendant of the 700-year-old Grimaldi dynasty, Rainier took power in 1949 and was Europe's longest-ruling monarch when he died on April 6 after a month in hospital battling heart, lung and kidney problems. 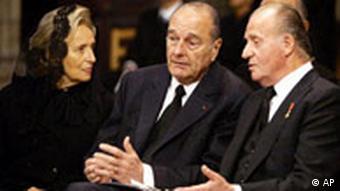 French President Jacques Chirac, King Juan Carlos of Spain and Britain's Prince Andrew were among the dignitaries attending the funeral, which triggered an unprecedented security clampdown by Monegasque and French authorities.

Hundreds of police lined roads into the principality and much of the Rock -- the promontory over the harbour where palace and cathedral both lie -- was sealed off to non-residents. Airspace over the area was closed and waters off the coast declared off-limits.

Shops and businesses were closed across the tiny state -- which is no bigger than New York's Central Park -- and red-and-white Monegasque flags were at half mast or furled with black ribbon. Many shop-windows bore portraits of the late prince and his family.

Over his long rule Rainier is credited with turning Monaco from a Riviera backwater into a thriving center of tourism and banking. He used his business acumen to modernize the economy and transformed a barren coastline into an urban crush of tunnels and high-rises. 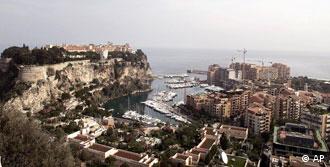 But the prince will be best remembered for his fairy-tale marriage to Grace Kelly, which ended in tragedy when the Oscar-winning US actress died in a car crash in 1982. He was be interred later Friday in a private ceremony next to his princess in the cathedral's crypt.

A host of European royals attended the funeral, including King Albert II of Belgium, King Carl XVI Gustaf and Queen Silvia of Sweden, Queen Sonja of Norway, and Crown Prince Willem Alexander of the Netherlands.

Other dignitaries at the funeral included Presidents Mary McAleese of Ireland and Janez Drnovsek of Slovenia, Russian Foreign Minister Sergei Lavrov and Farah Pahlavi, the widow of the shah of Iran.

The Grimaldis were to host an afternoon reception for several hundred guests after the funeral. A requiem mass in the cathedral for residents of Monaco was scheduled at 6:30 p.m. after which Rainier will be finally laid to rest. 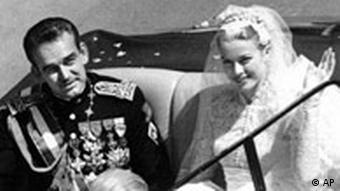 Princess Grace Kelly and Prince Rainier III of Monaco wave from an open car following their wedding at the Monaco Cathedral on April 19, 1956

Monaco has declared a three-month mourning period -- half that accorded to Princess Grace -- through July 6 for members of the royal family and household with one month for civil servants.

Caroline's third husband, Prince Ernst August of Hanover, was absent from the funeral. He is recovering in hospital from acute inflammation of the pancreas, but aides said his condition is improving.

Since its enlargement in May, the EU now spans across large parts of the continent. But a few tiny white spots remain on the map: Miniature states and territories, most of which have remained independent for centuries. (July 1, 2004)

Prince Rainier III of Monaco has died after nearly two weeks in a hospital intensive care unit. Rainier's son, Albert, has already assumed his father's duties as monarch of the tiny state on the Mediterranean coast. (April 6, 2005)

Monaco's Prince Albert is assuming the duties of his father, Prince Rainier, who is in intensive care in hospital, the palace announced Thursday. (March 31, 2005)