Three sailors went missing for days before US and Australian rescuers located them on a small Micronesian island. The rescue aircraft spotted an SOS message which the men had written in the beach sand. 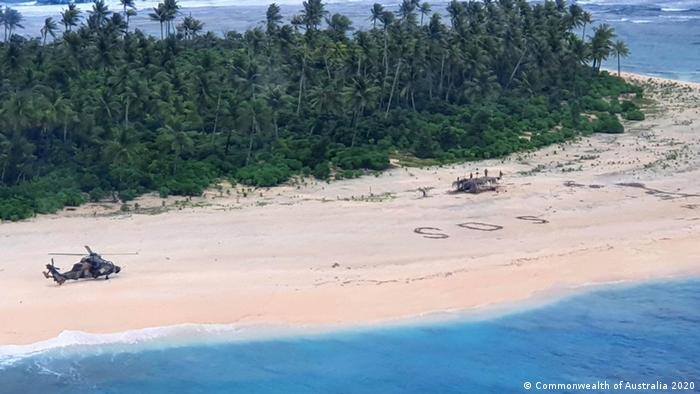 An Australian military helicopter delivered food and water to three sailors that had gone missing for nearly three days before they were located on a Micronesian island, the Australian Navy said on Monday.

The men were "found in good condition," according to a statement posted on the Defense Ministry's website.

The trio had reportedly embarked on a 42-kilometer (26-mile) trip between two atolls on a small skiff when they veered off course and ended up 190 kilometers west of their intended destination with no fuel.

After landing on the island of Pikelot, which is only 450 meters (492 yards) long, the men wrote SOS in large letters on the sand. SOS stands for "Save Our Souls" and is an internationally recognized signal of distress.

Meanwhile, the US Coast Guard center in Guam was informed of their disappearance and launched a rescue effort. They asked for assistance from HMAS Canberra, an Australian warship equipped with a helicopter dock that was passing through the area, and deployed airborne rescue teams.

Waiting for a ride home

Eventually, the US and Australian rescuers spotted the SOS sign on Pikelot Island, with the Australian reconnaissance helicopter landing and making contact with the lost sailors.

"I am proud of the response and professionalism of all on board as we fulfill our obligation to contribute to the safety of life at sea wherever we are in the world," he said.

A Micronesian patrol vessel was heading to the island to pick up the men, the Australian military said.

Read more:  Message in a bottle thrown into Rhine by German family found in New Zealand