Misrata bombardment continues as Gadhafi forces back off | World | Breaking news and perspectives from around the globe | DW | 24.04.2011

Misrata bombardment continues as Gadhafi forces back off

Libyan government forces have retreated from besieged Misrata but continue to shell the city. Meanwhile, the US military has confirmed the first strike by an unmanned drone in Libya. 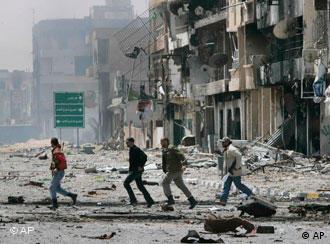 Forces loyal to Moammar Gadhafi seem to have retreated from Libya's coastal city of Misrata after weeks of fighting. Captured troops said that they had been told to withdraw to make way for rival clans to decide the fate of the country's third-largest city. 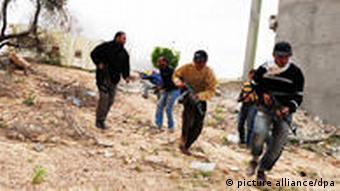 "The situation is very dangerous. Gadhafi's brigades started random bombardment in the early hours of this morning," he said.

Hospital officials claimed that the death toll for the day stood at 12. The rebels reported that they had taken control of a major road in the city, Tripoli Street, and that this was one of three residential areas that were targeted by government forces with weapons including Grad rockets.

"This may be cover for using more insurgent type warfare without any uniforms and without tanks," he told the BBC. "So it does not mean the Gadhafi regime has pulled out of Misrata."

Reports that Gadhafi’s siege of Misrata may be weakening came as the United States launched its first airstrike with an unmanned Predator drone on Saturday. The Pentagon confirmed the strike but did not provide details on the target.

Washington had approved the use of Predator drones on Thursday. NATO said the drones’ precision provides more flexibility to engage targets in densely populated urban areas like Misrata.

One spokesman for the rebels’ Interim Transitional National Council (ITNC) praised the deployment of drones while also expressing skepticism about reports of a Gadhafi retreat.

"With the introduction of Predator drones, Gadhafi has realized that the game has been stepped up one more notch," said rebel spokesman Mustafa Gheriani. "The ITNC would love to see Gadhafi forces completely retreat from Misrata, but we are not optimistic."

The siege has taken a heavy toll on Misrata

On Friday, Khaim said the local tribes would try to reach a solution through negotiations with the rebels in the city. If that failed, he added, they would resort to violence. Earlier in the week, a Gadhafi spokesman told reporters that the government had begun arming and training local tribesmen in the Misrata region. 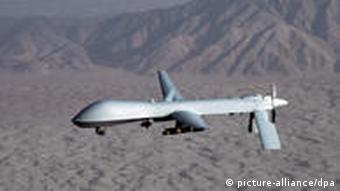 NATO warplanes have stepped up air strikes on Tripoli since Friday. Loud explosions were reported near Gadhafi's compound on Saturday. The Reuters news agency quoted a Gadhafi spokesman who said three people had been killed in an airstrike that hit a parking lot.

An international coalition launched air strikes against Gadhafi's forces on March 19, as part of a United Nations mandate authorizing the use of military force to protect the civilian population. The Western military alliance NATO assumed command of the operation on March 31.

NATO's mission in Libya has now lasted four weeks, and there are no signs of an ending yet. With the alliance coming under more pressure with each passing day, is a quick and acceptable withdrawal still possible? (21.04.2011)

The British filmmaker and photographer Tim Hetherington and American photographer Chris Hondros were killed in the ongoing violence in Libya, as leader Moammar Gadhafi continues to shell the besieged city of Misrata. (21.04.2011)

NATO has warned non-combatants to avoid troops so it can step up airstrikes in Libya. Meanwhile, Britain, France and Italy have announced plans to step up efforts to end the deadlock on the ground. (21.04.2011)