Militiamen have surrounded the Justice Ministry building in Tripoli in the third consecutive day of armed demonstrations in the Libyan capital. On Sunday, about 200 armed men surrounded the Foreign Ministry (pictured). 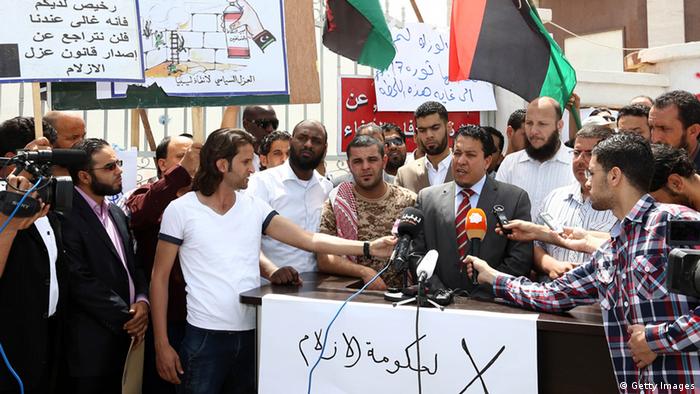 A standoff is under way after militiamen sealed off the roads to the Justice Ministry with their trucks on Tuesday. Armed men had stormed the Interior Ministry on Monday, as well as a state-owned television station, while a major Sunday protest focused on the Foreign Ministry.

"Several armed men in vehicles equipped with anti-aircraft guns surrounded the Ministry of Justice," spokesman Walid Ben Rabha told the news agency AFP. "They asked the minister and staff present to leave their offices and close the ministry."

According to representatives, the militias are rising up against former regime officials holding government posts. However, many in Libya believe they are trying to pressure the government of Prime Minister Ali Zidan out of trying to disband militias. Nearly two years after Moammar Gadhafi's overthrow, Libya is struggling to build a unified army and police force.

"We call on all those exercising their right to freedom of assembly and expression in Libya to do so peacefully," said Patrick Ventrell, a spokesman for the US State Department. He added that Libyans who have grievances "should peacefully utilize the democratic process to do so and not attempt to intimidate political officials. Libyans fought their revolution to establish a democratic system in which the voices of the Libyan people could be heard through peaceful means. Violence only threatens to undermine the legacy of the revolution."