Only two years after the US tech giant bought Nokia, it has now announced big cuts to its Finnish smartphone business. A Finnish union leader says this is the beginning of the end of Microsoft's smartphone production. 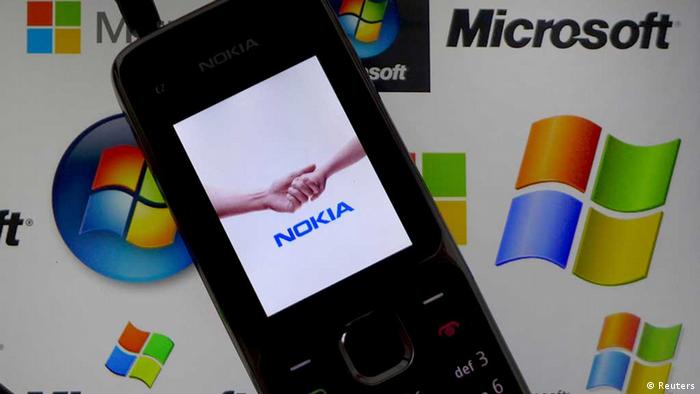 Microsoft said Wednesday it would slash 1,850 jobs and take a new impairment charge of $950 million (852 million euros) on its Finnish smartphone business, which it acquired from Nokia in 2014.

About 1,350 jobs would be cut in Finland, for which it had set aside $200 million for severance payments, Microsoft said in a statement. A further 500 jobs would go in other countries, it added.

"We are focusing our phone efforts where we have differentiation," said Microsoft chief executive Satya Nadella. "We will continue to innovate across devices and on our cloud services across all mobile platforms."

Although Microsoft indicated it would continue to develop the Windows 10 platform and support its Lumia smartphones, the firm's chief shop steward in Finland, Kalle Kiili, said Microsoft would no longer produce new phones.

"[Microsoft] will not be manufacturing devices, at least for the time being," Kiili told the news agency AFP. "We had rumors that something would happen, but not that everything would go," he said, adding that Microsoft had called up all its Finnish employees and that the crowd fell "silent" when they heard the news.

The decision means Microsoft scraps what was left in Finland of Nokia's former glory as the world's top mobile phone maker.

Nadella has already written off most of the $7.2-billion Nokia deal struck by his predecessor Steve Ballmer in 2014. Last July, the company said it planned to cut as many as 7,800 jobs and write down the handset business by $7.6 billion. Earlier this month, it agreed to sell its feature phones business to a new Finnish company HMD Global and Foxconn Technology Group from Taiwan for $350 million.

Windows phones had less than 1 percent of the global smartphone market in the first quarter on sales of 2.4 million units, according to research firm Gartner. That compares with Android's 84 percent market share and 15 percent for Apple's iOS.

When Satya Nadella replaced Steve Ballmer as Microsoft CEO two years ago, he inherited division over the company's strategy. Ballmer had faced significant resistance internally for his plan to acquire Nokia, and Nadella was initially against the move into smartphones.

Nokia has said it has signed an exclusive 10-year licensing agreement for newly formed Finnish company HMD to create Nokia-branded smartphones and tablets. The devices are to be made by Foxconn. (18.05.2016)

Microsoft has unveiled three new phones, a tablet, a laptop and a new wearable fitness tracker that will run its latest operating system, Windows 10. The tech giant is trying hard to capture more market share. (06.10.2015)