Microsoft shows off more of Windows 10

US technology and software giant Microsoft has revealed some more details about what it's next operating system will look like. It appeared that its digital assistant Cortana would play a pivotal role. 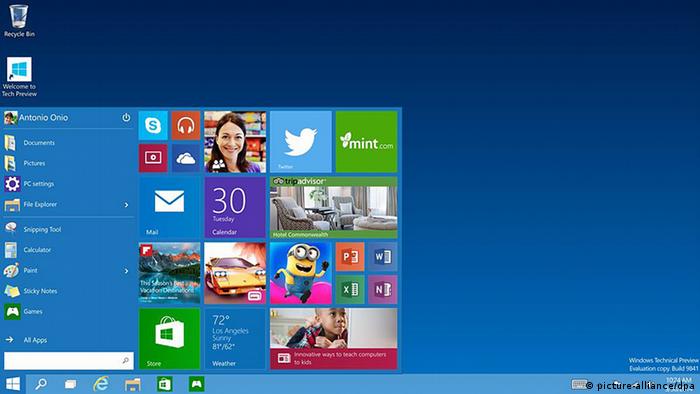 Following a rather limited preview of Windows 10 last fall, Microsoft on Wednesday pulled the curtain back farther on its coming operating system at an event at the company's headquarters in Redmond, Washington.

Executives made it clear Windows 10 would focus on bringing harmony to the diverse array of mobile gadgets in people's lives. The US tech company said its new operating system would make it easier to interact with devices.

"The number of devices is exploding around us," Microsoft's Terry Myerson said during the presentation. "It should be easy to put one device down and pick up another where you left off; technology needs to get out of the way."

The stakes are high for the Richmond firm as its last operating system, Windows 8, alienated users with a new interface that many found hard to navigate.

"They've positioned Windows 10 as the solution to all the problems they created with Window 8," Gartner analyst Brian Blau told AP news agency. In fact, there won't be a Windows 9, as if to signal a quantum leap was being made this time around.

The new operating system will come with a voiced-controlled digital assistant called Cortana, and a new browser named Spartan with a potential to fully replace the Internet Explorer.

During the first year after the release, Microsoft said the newest iteration of its software would be a free upgrade for anybody using Windows 7 or later.

Internet Explorer has stopped working — indefinitely — as Microsoft pulled the plug on the almost 27-year-old browser that has been infamous for crashing.