Mexico has seized a top leader of the Knights Templar gang, which controls large swaths of the state of Michoacan. The government also said it would recognize civilian vigilante groups fighting against the gang. 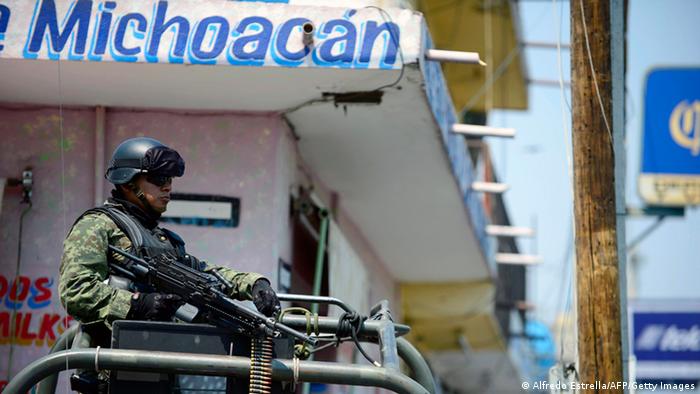 Mexican troops on Monday seized Dionicio Loya Plancarte, also known as "El Tio" ("Uncle"), a high-ranking leader of the Knights Templar cartel. The 58-year-old had a 30-million-peso (1.64-million-euro/$2.25-million) reward on his head from the government for drug, organized crime and money laundering charges.

The Knights Templar gang is blamed for much of the crime in western Mexico's troubled state of Michoacan. Federal forces have moved into the area in recent weeks to disarm vigilantes and flush out the gang.

Groups of civilian vigilantes had been demanding that federal authorities arrest top gang members as a condition for laying down their own arms. The vigilante groups, made up of locals, first took up arms in February 2013 in a bid to end the Knights Templar's reign of terror after police and troops failed to do so.

The government also announced it had reached an agreement with vigilante leaders to incorporate the armed civilian groups into a quasi-military unit, essentially legalizing the "self-defense" groups.

"The self-defense forces will become institutionalized when they are integrated into the Rural Defense Corps," the Interior Department announced in a statement on Monday.

Leaders of the vigilante factons will have to submit a list of their members to the Defense Department, and the army will apparently oversee the groups, which the government said "will be temporary."

The unrest in poverty-stricken Michoacan has become the most pressing security issue facing Mexico's President Enrique Pena Nieto, who took office in December 2012.

Conflict arising from Mexico's drug trade has left more than 77,000 people dead since 2006.

The Knights emerged from a split in another cartel in the state known as La Familia and have controlled large swaths of the mountainous state in recent years, extorting farmers and local businesses.