At a joint news conference with Russian President Medvedev in Sochi, German Chancellor Merkel said some of Russia's actions in Georgia had been "disproportionate" and urged Russian troops to withdraw from Georgia proper. 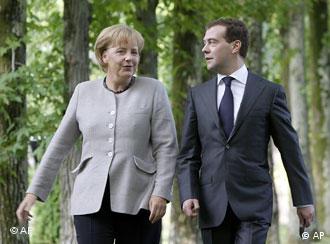 Merkel said the presence of Russian troops in Georgia proper "is not sensible" and urged that a six-point French-brokered peace plan be realized immediately.

"I have to say that I found some of Russia's actions disproportionate," Merkel said at the joint news conference at the Black Sea resort of Sochi, close to the Georgian border and the Moscow-backed rebel region of Abkhazia,

The chancellor said Russian troops should withdraw from Georgia proper and reiterated her position that Georgia's sovereignty could not be called into question.

"The point of departure must be the territorial integrity of Georgia," Merkel said.

The meeting between Merkel and Medvedev came as US Secretary of State Condoleezza Rice was in Georgia to show support for the pro-Western government of President Mikheil Saakashvili and discuss a peace plan.

"Women and children were murdered, churches packed with refugees set on fire and entire villages were razed," said Kotenev.

The ambassador added that Medvedev would warn Merkel against the influence of the EU's eastern European members on the bloc's policy toward Russia.

Though Friday's meeting was planned before the Caucasus crisis broke out, talks between Merkel and Medvedev were expected to focus almost exclusively on the conflict with Georgia. The German chancellor hopes that she will be able to convince her Russian counterpart to avoid any further violence, remove all Russian troops from Georgian territory and aim for lasting peace.

"Two points are sacrosanct for Germany," Merkel's spokesman Thomas Steg told reporters in Berlin on Wednesday. "The first is that the sovereignty and territorial integrity of Georgia are not called into question in future talks. The other is that it is totally unacceptable to question the legitimacy of the democratically elected Georgian government."

At the same time, experts hope Merkel's even-handed approach will make Russia more open towards the chancellor's message expected to be delivered in private to Medvedev. 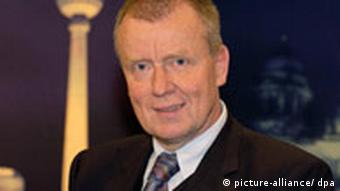 "Merkel will try to convince Medvedev to move toward a ceasefire, accept a monitoring mission of the OSCE and hopefully also be open to a stabilizing, international peace force in the region," Ruprecht Polenz, a veteran member of Merkel's conservative party and head of the foreign policy committee of the German parliament told DW-RADIO.

A day earlier, Polenz told news agency Reuters the EU should bind Russia closer to the bloc and consider offering Moscow a "privileged partnership" if it shows a willingness to adopt European values.

"I think the EU should make Russia a very clear proposal with clearly stated expectations in order to positively influence Russia's future behavior," Polenz told Reuters, adding it would be a mistake to scrap ongoing partnership talks with Russia because of its conflict with Georgia.

German Foreign Minister Frank-Walter Steinmeier meanwhile said on Thursday, Aug. 14, the European Union should maintain an even-handed approach to the conflict between Russia and Georgia if it wanted to play a constructive role in forging long-lasting peace in the Caucasus.

"It remains the case that a level-headed policy is the one that most helps people in the region," Steinmeier told reporters after a meeting of the German parliament's foreign affairs committee.

"We must criticize what needs to be criticized and we have done this in the past, including with clear words when necessary towards Russia ... with regard to Russian bombing of Georgia and the presence of Russian troops in Georgia-proper," Steinmeier said.

The foreign minister warned that the EU had to keep talking to both sides if it hoped to calm the crisis.

"We should also pursue a policy which is sensible and realistic," Steinmeier said on German television. "If the EU really wants to play a stronger role in the region, if the EU wants to help in the stabilization of a crisis-hit region, then the lines of communication must be kept open to Tbilisi and Moscow."

Divisions in EU over dealing with Russia

His comments came a day after EU ministers agreed to consider sending a mission to monitor a fragile French-brokered peace deal between Russia and Georgia.

But divisions have emerged in the European Union over the best way to deal with Moscow after fierce fighting erupted between Georgia and Russia last week. 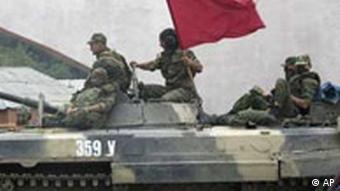 Many new EU members have condemned Russia's violent push into Georgia and want the EU to scrap talks with Moscow on a new strategic partnership that would enhance political and economic cooperation.

The United States, a strong backer of Georgia, and Britain have slammed Russia's military campaign against Georgia and have blamed it for the clashes that broke out between Russian and Georgian forces in the breakaway region of South Ossetia.

"To begin to repair the damage to its relations with the United States, Europe, and other nations and to begin restoring its place in the world, Russia must keep its word and act to end this crisis," US President George W. Bush said this week. "The United States of America stands with the democratically elected government of Georgia."

Moscow has reacted by warning Washington it would have to choose between partnership with the Kremlin or supporting Georgia.

Steinmeier's comments, however, reflect a more nuanced attitude in Germany towards Moscow in the current conflict.

German politicians, including Merkel, have carefully avoided assigning blame in the conflict. The country, which is heavily dependant on Russian energy supplies, is a strong advocate of closer ties with Moscow. Earlier this year, Germany led European resistance to plans, pushed by the US, to put Georgia on the track to NATO membership.

Russian President Medvedev met leaders of Georgia's separatist South Ossetia and Abkhazia regions and vowed Moscow would back them in talks on their future status. Meanwhile, diplomatic efforts continue. (14.08.2008)

Russia Pulls Out of Gori as Rice Heads to Peace Talks

Georgian soldiers began moving into the city of Gori Thursday as Russian troops withdrew. Condoleezza Rice, meanwhile, was on her way to Europe for peace negotiations over the South Ossetian conflict. (14.08.2008)

Merkel to Push for Lasting Peace Between Russia, Georgia

German Chancellor Merkel is to meet Russian President Medvedev Friday and visit Tbilisi next week for talks with President Saakashvili on forging a long-lasting peace between Georgia and Russia after a bloody conflict. (13.08.2008)

Germany Has Long Been a Mediator in the Caucasus