With so many publicly listed German companies hit by corporate scandals, Chancellor Angela Merkel appealed to top industry heads to be vigilant about enforcing business ethics. 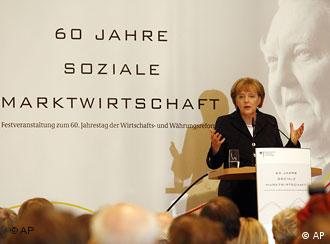 At a speech marking 60 years of Germany's post-war “social market economy”, which is a mixture of free-markets and generous welfare benefits that give worker representatives a big say in running companies, Chancellor Angela Merkel made an appeal to respect ethical business practices.

"Dear industry representatives: Take care that our community's rules of play are adhered to at the highest level," Merkel said at an event attended by top managers of German companies.

"Every irresponsible colleague in your circles endangers the basis of our liberal society," Merkel said.

One scandal after the other

Many of German's top DAX conglomerates have been engulfed in corporate scandals lately.

The former CEO of Siemens Heinrich von Pierer, who had also been a technical advisor to Merkel, is currently on trial in court proceedings related to a 1.3 billion euro ($2 billion) bribery and corruption scandal that came to light two years ago. Although prosecutors are not expected to charge him with a criminal offense, von Pierer could be fined for negligence in supervising company affairs.

At Volkswagen, several former top managers of Europe's biggest carmaker have also been prosecuted after revelations in 2005 that they used a slush fund to pay for holidays and prostitutes.

Earlier this year, Klaus Zumwinkel resigned as CEO of Deutsche Post AG after being charged with tax evasion in an wide-reaching investigation of offshore bank accounts that involves hundreds of Germans.

Last month, German prosecutors launched an investigation into allegations that Deutsche Telekom AG monitored telephone records to track possible information leaks to media in a violation of data protection laws. The German food discounter Lidl was also charged for violating privacy laws by spying on its employees with video surveillance.

However in an interview with the Financial Times earlier, Merkel had also stressed the financial benefits that such firms bring to the country and warned against a blanket condemnation of all German businesses across the board.

"This is a heavy burden because it shakes confidence in our institutions -- and companies like Telekom and Siemens are almost institutions in Germany. Such isolated cases must be thoroughly and decisively investigated," Merkel told the paper. "But our criticism should not be understood as a blanket condemnation of business," she added.

"These provide hundreds of thousands of jobs in this country. My patriotic sensitivity tells me I must stand by these companies in tough times. We must lead them onto the path of virtue, no question, but one should not condemn them en masse."

Opinion: Legislation Is Not The Answer to the Telekom Scandal

DW's Karl Zawadzky believes the revelations of serious data abuses at Deutsche Telekom will dent the image of German business as a whole. But the business journalist does not think a change in the law is needed. (02.06.2008)