Merkel and Sarkozy united in support for Greece | Germany | News and in-depth reporting from Berlin and beyond | DW | 17.06.2011

Merkel and Sarkozy united in support for Greece

The German and French leaders say they have found common ground on the Greek economic crisis, and urged Greece to continue with its ambitious reform and austerity program. 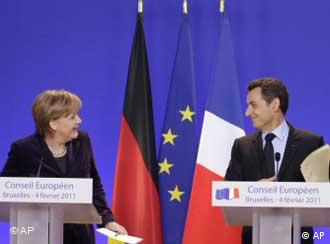 Merkel and Sarkozy say their nations are on the same page

The German and French leaders emerged from a meeting in Berlin on Friday with a common message on helping the ailing Greek economy. The pair called for a swift solution to the country's debt crisis, which threatens the stability of the euro single currency.

German Chancellor Angela Merkel and French President Nicolas Sarkozy said Greece would need a second bailout package to buttress a 110 billion euro ($157 billion) bailout agreed last year. The issue of a second aid deal, expected to be worth around 80 billion euros to 120 billion euros, has divided eurozone members, with the two leaders saying they had reached a "breakthrough" on the matter and that time was of the essence.

"Germany and France are determined at the upcoming EU summit ... to say that we want a quick solution," Merkel said at a joint news conference in Berlin.

The leaders also stated that private sector involvement in a second bailout should be on a voluntary basis and be conducted in coordination with the European Central Bank, the European Commission and the International Monetary Fund. 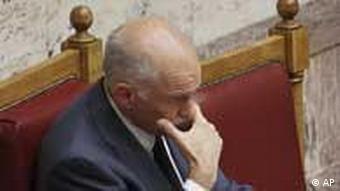 Papandreou has suffered a massive drop in support

"I want to stress this: There is no legal basis so far for there being obligatory involvement," Merkel told reporters after the talks.

Coming into the meeting, France had opposed German demands that private lenders such as banks and insurance companies be prepared to accept losses arising from their loans to Greece. Paris, meanwhile, feared private losses would spread to other parts of the eurozone.

Merkel also applauded reform and austerity measures being pursued by the Greek government of Prime Minister George Papandreou which have led to a widespread drop in support for the Socialists.

Earlier Friday, Papandreou announced wholesale changes to his cabinet in a bid to address the fall in popularity as he attempted to push through the widely unpopular reform program.

Shortly after his appointment, the new finance minister, Evangelos Venizelos, vowed to back the austerity measures as part of his plan to "carry out a real war" on the country's debt crisis. 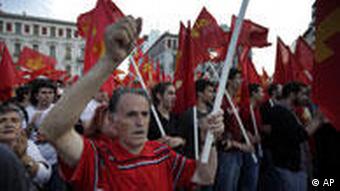 The reform measures are not popular among Greeks

The Greek Socialists' reform plan involves 28 billion euros worth of new taxes and spending cuts, and a privatization of state assets worth around 50 billion euros.

The proposals sparked violent clashes between protesters and riot police in the Greek capital, Athens, earlier this week.

European Commission President Jose Manuel Barroso said on Friday in Brussels that he hoped "the new government can be approved rapidly, so that the process for continuation of financial assistance to Greece may continue smoothly."

Despite the unpopularity of the reform measures in Greece, Barroso remained confident that "leaders in Greece and Europe will rise to the challenge and act with responsibility."

Support for the euro

Merkel reiterated her support for the euro and said Germany's prosperity was dependent on its future stability. Germany and France were determined to defend the common currency, Merkel told reporters, saying "we will do everything to preserve and support the euro."

The talks precede a two-day EU summit called for next Thursday to address Greece's debt woes, which have destabilized the euro single currency and sent jitters through markets around the world.

The perceived lack of progress in resolving the Greek debt crisis is draining international markets of confidence. Deutsche Welle asked a number of European economic experts just how serious they think the situation is. (16.06.2011)

Can Greece take a page out of Argentina's book?

Ten years ago, Argentina devalued its currency in order to avert a crippling financial crisis. Financial experts are advising Greece to exit the eurozone and take a similar path. Can Athens learn from Buenos Aires? (17.06.2011)

The Greek prime minister, George Papandreou, has announced a broad cabinet reshuffle in the face of mounting pressure over the nation's ailing economy, naming new ministers for finance and foreign affairs. (17.06.2011)