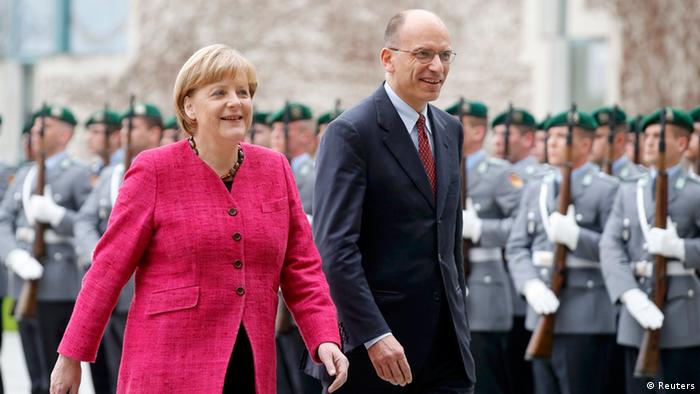 Letta met with Chancellor Merkel in Berlin Tuesday, hours after winning his final vote of approval by the Senate in Rome. The meeting came one day after Letta's inaugural speech where he had pledged to push an agenda of growth rather than austerity to revive the recession-hit Italian economy.

Merkel, a strong advocate of structural reforms, spending cuts and deficit reduction across the 17-nation eurozone, said she saw no contradiction between budgetary discipline and the goal of economic growth.

"For us in Germany, budgetary consolidation and growth are not contradictory," Merkel told a joint news conference with Letta.

"We want to ensure Europe emerges from this crisis stronger than it went into it. As part of that every country must do its part. Italy has taken considerable steps in this regard," Merkel said.

She also noted the need for job growth across Europe. "Fiscal policy is not everything, of course. We do politics for people and people want jobs, which is why Europe has to manage to create employment and encourage investment and we have a lot of work to do in this area," Merkel said. Italy is currently grappling with a two-trillion-euro ($2.6 trillion) debt and an 11.6 percent unemployment rate.

After two months of political deadlock following Italy's February election, Letta said the country "is emerging stronger from this crisis" and pledged to "stick to the path of budget consolidation and fixing public finances."

"As we have said all these months, regarding the commitments every country has toward the EU, we have done our part," he said.

Merkel wished Letta "a truly lucky hand" with his new government and said she looked forward to working with him in the future.

On Wednesday, the 46-year-old premier is scheduled to meet with France's President Francois Hollande in Paris, and then travel to Brussels.