German Chancellor Angela Merkel affirmed her opposition to quickly admitting Ukraine and Georgia to the North Atlantic Treaty Organization (NATO) through a spokesman on Monday. 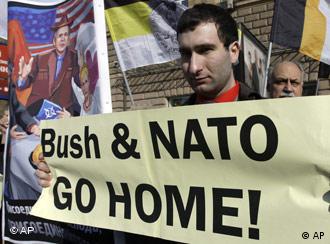 Ukraine's NATO bid has been hotly contested in the country

Foreign Minister Frank-Walter Steinmeier, a political rival who is running for the chancellorship next year, had last week also firmly rejected a US proposal to admit them quickly.

In Berlin, deputy government spokesman Thomas Steg said Merkel was "seamlessly" in agreement with Steinmeier on the matter. Neither candidate nation would fulfill the criteria for NATO entry in the foreseeable future, he said.

The question is on the agenda when NATO foreign ministers meet Tuesday and Wednesday in Brussels.

The outgoing administration of US President George W. Bush has proposed admitting them without waiting for them to qualify through a membership action plan.

Fast-track a sure refusal?

Most analysts regard the action plan as a polite way of refusing the two nations entry without being seen as doing so.

Steinmeier told US Secretary of State Condoleezza Rice by phone last week that Germany would not agree to alter the procedure.

Steinmeier's spokesman, Jens Ploetner, stressed Monday that the action plan was a compromise that had been agreed at a NATO summit in Bucharest. He said Germany believed this compromise agreement was a binding one.

Georgian President Urges Europe To Be Tough With Russia

Georgian President Mikheil Saakashvili warned the European Union on Sunday not to make too many concessions to Russia in upcoming negotiations on a partnership agreement. (30.11.2008)

NATO Assures Ukraine it Has Not Been Forgotten

NATO has not turned its back on Ukraine and is still eager for the former Soviet republic to join its ranks, the alliance’s head, Jaap de Hoop Scheffer, said at high-level talks in Tallinn, Estonia, on Thursday. (13.11.2008)