American servicemembers say they experienced torture and death threats during their captivity in the last Gulf War. Iraq also has failed to reveal the fate of 600 missing from Kuwait since 1990. 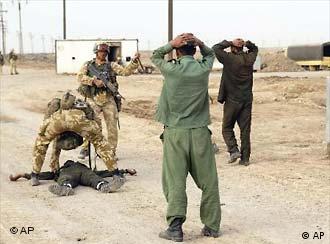 With the news about the capture of U.S. soldiers in Iraq fresh in his mind, United States President George W. Bush passed a threatening message along to the regime of Saddam Hussein.

"We expect them to be treated humanely, just like we'll treat any prisoners of theirs that we capture humanely," Bush said on Sunday. "If not, the people who mistreat the prisoners will be treated as war criminals."

But based on the experiences of some U.S. prisoners of war during the first Persian Gulf war, the approximately five Americans being held in Iraq may have a painful captivity awaiting them.

One of those former prisoners is Geoffrey Zahn, a former Marine officer who was forced to condemn the U.S.-war during a videotaped session. "I think our leaders and our people have wrongfully attacked the peace-loving people of Iraq," Zahn said at the time.

But the Iraqis had to apply doses of pain to get him to make the statement, he said. "I had a fractured shoulder, and my hands were tied behind my back," he said. "They took me into a room and told me that they would kill me."

Pilot says he was beaten

Dale Store, a pilot shot down in 1991 by Iraqi anti-aircraft fire, spent 33 days as an Iraqi prisoner. It was one of the worst experiences in his life, Store said.

"I was on the ground and they kicked me in the face and kidneys," he said. "Earlier, they had tortured me with electric shocks. ... When they finally stopped asking me questions, I was hoping they would kill me."

The latest U.S. prisoners in Iraq were paraded before the cameras of Iraqi television on Sunday. The Arab television news station Al-Jazeera then broadcast the Iraqi footage, which also showed the bodies of what looked like dead U.S. soldiers. The Iraqi television commentator said the conflict was proof that the United States "does not respect its sons and is not working to guarantee them a stable life, but is sending them into a holocaust."

The capture of the Americans also refocuses attention on the fate of other people captured during the first conflict, which began with the Iraqi invasion of Kuwait in August 1990. In all, at least 21 Americans were held as prisoners of war by Iraq according to the Pentagon.

One of those people is a Navy aviator, Lt. Cmdr. Scott Speicher, who was shot down over Iraq in 1991. Speicher and three other pilots flew off the aircraft carrier Saratoga for a bombing run on Jan. 17, 1991. Another FA-18 Hornet pilot saw a flash and lost sight of Speicher.

The next morning, the Defense Department announced that Speicher's plane had been downed by an Iraqi missile. Several months later, the Pentagon classified the pilot as killed in action, but changed that status last year to "missing in action, captured."

Iraqi officials have said Speicher was killed in the crash.

Speicher's flight suit was found at the crash site, and there have been persistent intelligence reports about a U.S. pilot held in Baghdad. He is only case still unaccounted for from the war.

Like Speicher's relatives, many citizens in Kuwait also are wondering about the fate of their family members who have been missing since the Iraqi occupation.

Fadila al-Obaid still hides cherished pictures of her husband from his three children. "Every time they see them, they cry," she says, burying her face in the folds of her veil.

Her eldest daughter, 19-year-old Mashaa'l Sherif, was the last person in the family to speak to the defense ministry official before he was caught trying to flee the country. Before he drove off, she ran up to his car and pleaded with him to stay. He kissed her, but insisted he had to go.

"I miss my father so much," she says.

Kuwait says 600 people were taken during Iraq's 1990-91 occupation of the tiny, oil-rich nation. Iraq was required to return them or account for them under U.N. resolutions that ended the Gulf War, but it hasn't complied.

As U.S. and British troops pour into Kuwait, relatives of the missing are pinning their last hopes that the new U.S.-led invasion of Iraq will help them finally find out what became of them.

Many give up hope

For many families, the final blow came in October, when Saddam opened jail doors to political prisoners -- but no Kuwaitis came home.

"Now, Kuwaitis are ready to accept it, if they are dead. Just tell us," says Abdul Hameed al-Attar, whose son has never been returned.

A German student volunteered for duty as a human shield in Iraq. With war approaching, though, he decided to leave. But he still thinks the idea may be useful in preventing wars of the future. (March 21, 2003)