Mecca journal: Looking for heaven′s gate | World | Breaking news and perspectives from around the globe | DW | 18.11.2010

On the last day of the Hajj, DW reporter Ali Almakhlafi meets an adventurous Saudi photographer and gazes at helicopters circling the Kaaba. 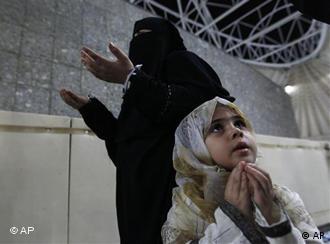 I'm back in Mina, a town close to Mecca. Last night about 2.5 million pilgrims spent their night here in tents. The symbolic stoning of the devil ends today – and so does the Hajj. I look at the Kaaba one more time and almost feel a bit sad. Today, pilgrims will circle the Kaaba seven times - and then it's all over. However, I'll stay a little longer. I will visit the city of Jiddah and tell you about my experiences there.

Looking at the Kaaba, a question by DW user "Serubogo" comes to my mind. He wondered whether Islamic tradition says that heaven's gate is located above the Kaaba – and whether there's even a non-fly zone around Mecca for that reason.

Well, I've never heard anything about that. I asked some of the pilgrims, and they hadn't heard about it either. So I guess it's another example of the fact that religious teachings and local or regional customs merge from time to time – in Islam as well as in other religions. 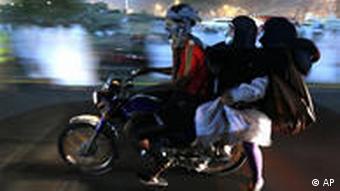 But even if there was a no-fly zone here, then it definitely doesn't apply to helicopters! Because one can see them hovering above around the clock here, monitoring the pilgrimage and supporting the police and paramedics.

Still, as in previous years some pilgrims died during the Hajj, but the numbers were apparently lower than earlier. Until now the authorities either couldn't or didn’t want to give me any concrete figures.

But apparently most of the deaths were related to traffic accidents. Unlike earlier, there were no mass panics as the security measures were improved significantly. DW user Nasyr Muhammad is probably not the only one who was interested in this piece of information. 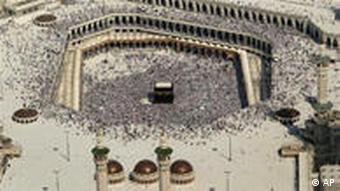 Taken from a helicopter - unfortunately not from Susan

Susan Baaghil has a vivid recollection of the events of 1997 when hundreds of pilgrims lost their lives during the chaos of that year’s Hajj. Susan is considered Saudi Arabia’s first female press photographer. She documented the catastrophe aboard a helicopter with its doors open. "These assignments are dangerous," she says. "But being a photographer is my calling."

Like me, Susan, who is fluent in four languages, originally hails from Yemen. There aren't all that many female photographers in Saudi Arabia, but she says she feels accepted by her male colleagues. By the way, she's not only working for the Reuters news agency – but also as a wedding photographer. "The first thing I saw after I was born wasn't my mother, but her camera”, she says with a smile. 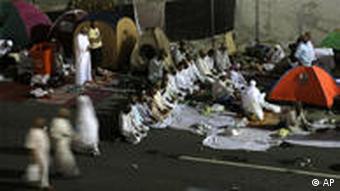 Muslim pilgrims pray on the side of a street

As a press photographer, Susan has very high standards. She doesn't want to snap only the usual pictures of the huge crowds of pilgrims one often gets from the event. Instead she also wants to cover the places the Saudi authorities are less keen for the world to see: like the tent cities of "illegal" pilgrims who came here without a visa or an official permit.

Most of them are poor people from Saudi Arabia and other countries who simply can't afford the costs of the Hajj. "My pictures are supposed to reveal how difficult it is for these people," explains Susan. "My goal is that people feel for these poor pilgrims and perhaps help them.” 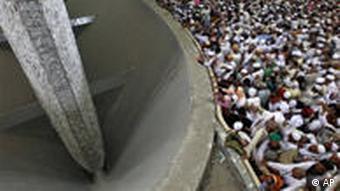 In these tent cities the garbage is piling up: plastic bags, empty boxes, left over food that is left to rot - the stench is at times so bad that some pilgrims only walk around with their masks on. There are simply far too few trash cans and many people are afraid of the spread of diseases.

At the same time, there are quite a number of very affluent pilgrims. I met a man who was given 7,000 Euros from his mother to make sure he would have a comfortable Hajj and could spend his nights in a luxury hotel. That leads me to the question of DW user Hayman Said who asked how pilgrims spend their money during the Hajj. Well, I don’t know how it is all spent in detail. But I would guess that the hotels here are probably doing really well.

Consulting a doctor is free

By the way, I am also living in a hotel here. It's a room with eight beds which I share it with pilgrims form Lebanon, Syria, and Yemen. Last night we were really cold, because we had turned the air conditioner down too low – our own fault. So today, I feel like a caught a little cold. And my knee hurts too, so I’ll go see the pilgrimage physician.

While I really miss Germany, I like the fact that going to the hospital is free and totally unbureaucratic here. I see a Saudi physician called Muhammad Ali Khalifa who studied in Austria twenty years ago and still raves about the country and the people. In a friendly tone, he reprimands me for having missed some vaccinations. "Is that a problem?" I ask him, a bit worried. "No," he replies. "That’s okay. There's no danger of swine flu or meningitis during the Hajj season."

How to slaughter a digital sheep

Does the Feast of Sacrifice mean that streets and squares in Mecca are filled with slaughtered animals? No! As DW reporter Ali Almakhlafi discovered, digital sheep are getting more and more popular. (17.11.2010)

After staying up all night, DW reporter Ali Almakhlafi is now wearing his new pilgrim's garment. In today’s segment he explains how fast a shopping mall can be turned into a prayer room. (16.11.2010)

The Hajj has begun. After an eventful journey, DW reporter Ali Almakhlafi has reached Mecca, and started answering DW users' questions. But first - a sudden change of clothes. (15.11.2010)