Meat made in the lab as a tool to fight hunger

A researcher in the Netherlands hopes to create the first hamburger by growing muscle cells in a Petri dish. For many the experiment seems tasteless, but there are very good reasons for it. 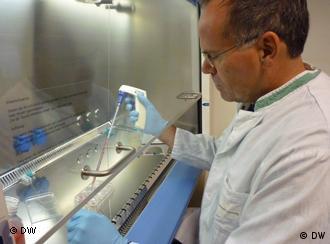 Mark Post's workspace is a bit reminiscent of Frankenstein's kitchen. It looks like a normal laboratory with instruments for sterilization such as incubators and microscopes. A few weeks ago, Post and his co-workers set up the laboratory for the current experiment they are conducting. While the radio hums in the background, Post explains how meat is grown in a Petri dish.

The process begins with myoblasts, the precursor cells to the muscle fibers of an embryo - in this case of a cow.

"We isolate the myoblasts, we culture them so that they multiply," Post says. "When we have enough cells, we differentiate them into myotubes, which are actually muscle cells. Then we seed them onto a Petri dish and let them grow in an incubator."

The incubator imitates the exact conditions that exist within a cow: The temperature is 37 degrees Celsius, the air moisture is close to 100 percent, and the carbon dioxide content is around five percent, while oxygen lies just below 21 percent.

The myotubes are fed with a nutrient solution that consists of sugar, proteins, amino acids, minerals and vitamins. The growth process is not accelerated and there's no genetic engineering - the cells should feel as comfortable in the incubator as if they were growing inside of a cow. 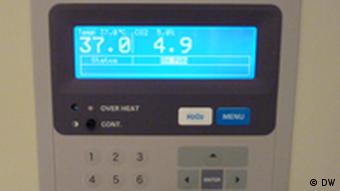 An incubator simulates the situation inside a cow

The result after about six weeks looks as if the layers of a paper handkerchief had been picked apart and the resulting strips were cut into the right shape. That's edible? Post laughs.

"The tissue is still white, not flesh-colored," he says. "It still has the consistency of tissue, that's why you can't try it yet. We are currently working on the scientific foundation, on the optimal conditions in which to produce meat in a Petri dish."

Post hopes to get that far over the coming year. He wants to introduce a prototype, a hamburger made from laboratory meat that looks exactly like a traditional burger.

"The volunteers are already in line to be the first to try the hamburger," Post says, this time in all seriousness.

He would gladly try the first burger himself, but Post plans to give way for his sponsors. The Dutch government helped finance the project, but the lion's share of the money currently comes from private sponsors.

The doctor has been researching in-vitro-meat since 2008. Post also keeps quite busy with other responsibilities. He is a professor of physiology at the University of Maastricht and leads the CARIM School for Cardiovascular Diseases, which has 250 employees. Post has a team of three, including himself, to work on the in-vitro-meat project.

The research team in Maastricht is not the only group in the world that is creating synthetic meat. In New York, researchers are experimenting with fish filets and at the University of South Carolina they are working on turkey, while similar experiments are being conducted at the University of Missouri. In the Netherlands, scientists from several universities have formed a network. While Post continues to conduct the rudimentary research, others are tweaking the nutrient solution to find the optimal mix.

In August 2011, the researchers met in Gothenburg, Sweden, to discuss and coordinate their research and find common investors. It would take around 1,000 workers in a worldwide network to turn the pale cell strips into a succulent, market-ready burger within the next 10 to 15 years, according to Post.

He hopes to attract more money by creating a prototype-hamburger that proves that his process works.

Post says it would also be possible to create a complete steak through his process. The principles are the same and apply just as well to poultry or pork. The attitude of the public towards his project has also changed.

While people used to react to his project with disgust, Post says that many are now more open to the idea of finding alternatives to meat and see the advantages.

"The method in which meat is produced is very ineffective," Post says. "Hogs and cows as the main sources of meat have a bio-conversion rate of only 15 percent. We have to cultivate a lot of plant protein for livestock in order to create a comparably small piece of animal protein."

In order to create a kilogram of meat, a cow requires seven kilograms of feed - mostly in the form of cereals. Soya is also used, which contributes to the felling of rainforests. Around a third of the cereal harvest worldwide goes toward livestock feed instead of on the plates of people in developing nations, according to a study by Oxford University.

"With this approach, we won't be able to supply the world with high quality food," Post says. "And breeding livestock is a burden on the environment. The animals use a lot of water and land. Seventy percent of the land under cultivation in the world is used for breeding livestock. In addition, the amount of energy used is enormous. The animals emit a significant amount of our climate killers."

The main problem is with methane gas, which is 23 times more harmful to the climate than CO2. A cow burps every 40 seconds and emits 250 liters of methane gas a day, creating a tremendous burden on the environment. With around a billion cows worldwide, the negative effects add up. In the end, raising livestock is responsible for around one-fifth of a percent of all greenhouse gases.

It wouldn't just be a blessing for the environment if we could find other resources for protein.

"We like to turn a blind eye toward the conditions under which animals live and die," Post says. "A developed society can always accept less. We also know that with livestock breeding, sicknesses and epidemics can also arise among animals, which lead us to using antibiotics." 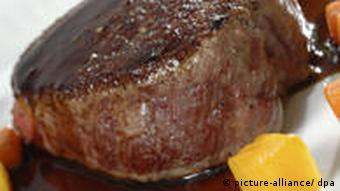 The final product would be just like authentic meat

The consequences of eating meat

Post is no vegetarian and he is conscious that for many, meat consumption is part of the western lifestyle. Eating a succulent steak for dinner will also become increasingly common in many other regions of the world. According to a prognosis by the UN Food and Agricultural Organization (FAO), meat consumption will double to an annual 460 million tons by 2050. Our planet cannot simply absorb that kind of increase.

But who would consume the laboratory meat? Would it become a lifestyle product for well meaning do-gooders or a contribution to the fight against hunger in the world?

"You can serve niche markets and offer all types of meat," Post says. "But my ambitions are set a little higher. My main interest is to do something that is more effective than the meat we know today."

In-vitro-meat could also help to fight hunger and that is exactly the goal Post has in mind.

To mark World Food Day on 16 October 2011, DW-World presents an exclusive interview held earlier this month with Jean Ziegler, the former UN Special Rapporteur on the Right to Food, about the causes of world hunger. (16.10.2011)