They stole chicken and died a painful death in the mill. Germany's most famous tricksters, Max and Moritz, pulled pranks kids today wouldn't dream of and were read about around the world. They turn 150 this month.

"Ah, how oft we read or hear of boys we almost stand in fear of! For example, take these stories of two youths, named Max and Moritz."

So begins the story in seven pranks of the two famous rascals. And fear is no understatement for these dangerous rogues.

"Max and Moritz" belongs to the classics of German culture and traces of this book can still be found in everyday culture. The picture book also became famous around the world, as it has been translated into over 200 languages and dialects.

Is it really a children's book?

The author Wilhelm Busch could not have imagined that his book would become so successful. The first publisher he approached with his manuscript in 1864 refused to publish it. A year later, Kaspar Braun agreed to publish the book in its entirety, and not as strips in a satirical weekly, as Busch had first suggested.

In October 1865, exactly 150 years ago, the first edition of the book was released - and success came quickly afterwards. It became a best-seller during Wilhelm Busch's lifetime. The first translation was published in 1866 in Denmark, a few years later the English one came out, and in 1887 a Japanese version of the book was even made available. 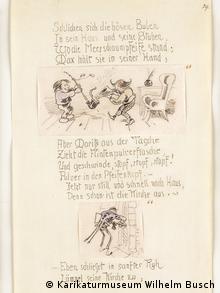 "Wilhelm Busch himself was stunned by this success," says Eva Weissweiler, who wrote a biography of the author. She believes the book was not necessarily written for children, but rather as criticism of the state of society at the time.

"In the 1860s, people from poor, rural regions were massively migrating to America. There were many incredibly poor people working as day laborers, and they would leave their numerous children on their own. There were therefore thousands of children roaming around, and some of them would survive by stealing food, like Max and Moritz," explains Weissweiler.

"So if there actually is a 'moral' to Max and Moritz, I believe it went in this direction. It aimed to criticize - through humor - the terrible social conditions which were created by adults," she adds.

And the end? Max and Moritz die, ground by the miller.

This too wasn't so far away from reality at the period, says Eva Weissweiler. Children who were caught committing petty theft were sometimes detained for decades; some repeat delinquents were even sentenced to death. "Whether they ended up hanging in prison or crushed by a mill, death is death."

A model for American comics

Regardless of how one interprets the story, the picture book is considered a pioneer of modern comics, which developed in the US at the end of the 19th century. 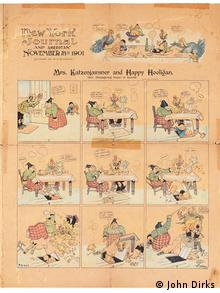 Comic strips became popular in US newspapers. In December 1897, the Sunday edition of the "New York Journal" published for the first time "The Katzenjammer Kids" by the German cartoonist Rudolph Dirk. The media mogul William Randolf Hearst had commissioned him with the series. He wanted to increase the circulation of his newspaper and he reportedly said he needed "something like Max and Moritz" for his paper.

Dirk applied the instructions literally and borrowed on Wilhem Busch's characters to create the cheeky twins Hans and Fritz. In some cases, the similarities go one step further: "There used to be a very high proportion of German-speaking press in North America at the time. And in those papers, the two characters are explicitly called Max and Moritz," says cartoon expert Martin Jurgeit. That would be called pure plagiarism nowadays.

This all happened during Wilhelm Busch's lifetime. He died in 1908, without having taken action against it. He did not have the capacity to do so, claims Jurgeit, because he did not own the rights to "Max and Moritz." He had transferred them to his publisher Kaspar Braun.

In any case, his letters show that he knew about the comics in the US, says his biographer Eva Weissweiler. "He was both irritated and flattered: Irritated by the very obvious plagiarism and flattered that the stories of his village got such an international reception."

Busch's original manuscripts for "Max and Moritz" were preserved to this day. His influence in the history of international comics is undisputed. Here in Germany, the most important award for comic books is the Max & Moritz Prize.

"Asterix and the Missing Scroll" is the 36th album of the successful comic series. Not many details about the new adventures were leaked - even though a famous whistleblower infiltrates the story. (21.10.2015)

Refugees, cosplayers and bimbos turned out in droves at this year's Frankfurt Book Fair, which opened to the public over the weekend. (19.10.2015)