Mass graves have reportedly been found in the Democratic Republic of Congo as fighting continues between government troops and M23 rebels. The Congolese army have retaken a key town previously held by the insurgents. 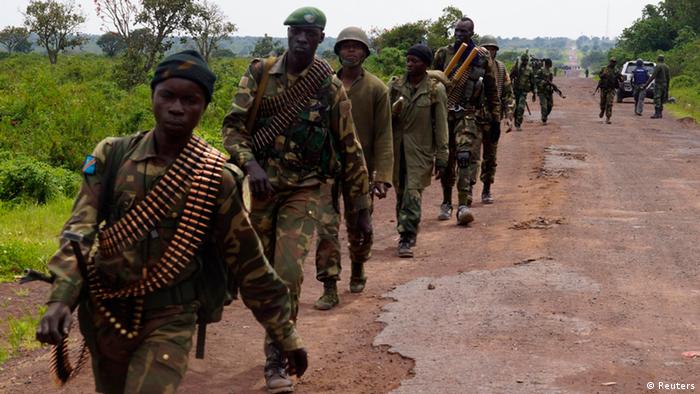 Troops retrieved control of a major military base at Rumangabo on Monday, having re-taken Kiwanja, Rutshuru, Buhumba and Kibumba over the weekend. Located around 40 kilometers (25 miles) north of Goma, the strategic capital of the North Kivu province, Rumangabo has been controlled by M23 rebels for just over a year.

"I confirm that we have just taken the city of Rumangabo," Congolese military spokesman Lt. Col. Olivier Hamuli said. "[We] entered the city at 11 a.m. and were met by the applause of the population."

In conflict regions in the DRC schools often serve as emergency accommodation for refugees, many of whom have left their traditional jungle homes. This can lead to problems with local residents. (12.09.2013)

"We fought, but not for very long - the enemy is demoralized by the strength of [our] firepower."

Having fled into the bush, M23 has nonetheless vowed not to give up: "This is not the first time we have withdrawn. It is not the end of the line for us," Deputy Spokesman Lawrence Kanyuka told news agency Reuters. "We are still in Congo. We are Congolese. We are fighting for our land and our survival." He rejected reports leaders had fled to neighboring Rwanda, which has denied backing M23.

Soldiers cleaning up after retaking Kibumba discovered three mass graves. One witness, who did not wish to be named, told news agency AFP he had seen "horrible things" at the sites of the graves.

"I saw three or four child skulls, underwear and women's clothing. There were insects in some places, which meant there were not just bones there. Further on there was a large ravine where people said quite a lot of bodies had been thrown but I wasn't able to check," the witness said.

A special commission has been set up to identify the graves. Defense Minister Alexandre Luba Ntambo said it would be tasked with "determining their scale as well as those responsible for these serious human rights violations."

Hostilities have increased since peace talks in neighboring Uganda between the government and M23 broke down, when the latter demanded full amnesty for its leaders.

The rebel group was formed in April 2012 and named after the peace treaty signed on March 23, 2009. They are at odds with the government due to their belief the terms of peace agreement have not been met.

The central African nation's government has had assistance from a specially created UN intervention unit called MONUSCO, which has a mandate to engage with rebel forces fighting government troops.

One MONUSCO peacekeeper, from Tanzania, was killed in the fighting with M23 in Kiwanja on Sunday.

The weekend's fighting led to UN Security Council talks on Monday, while United States Special Envoy for the Great Lakes and the Democratic Republic of the Congo Russell Feingold described the unrest as a "tinderbox."

"I hope that [Congolese] President [Joseph] Kabila and others in the DRC see this chain of events that have occurred as something that enhances their credibility as a military, but that there are enormous risks in simply moving forward, believing that a military solution is the full answer," he said.

"It risks bringing in other forces into this matter that could lead to a cross-national war."

But Ntambo said there would be "no limit" to the lengths the army would go to defeat the rebels. He said M23 was "a rebel movement, a negative force ... I don't see how someone can stand up and tell us when to stop."