German national team head coach Joachim Löw has named Manuel Neuer as his new captain. The Bayern Munich goalkeeper takes over from Bastian Schweinsteiger, who has retired from international football. 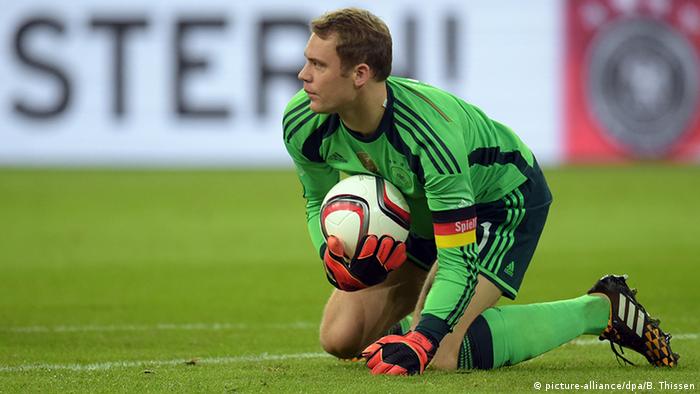 The German football association (DFB) announced the widely expected appointment of Manuel Neuer as the national team's new captain in a statement posted on their website on Thursday.

He succeeds Bastian Schweinsteiger, who played his last game for the national team, a 2-0 victory in a friendly against Finland on Wednesday.

"I regard Manuel Neuer as the logical successor to Bastian Schweinsteiger. He has everything that I like to see in a captain," coach Joachim Löw was quoted as saying. "He takes responsibility, he is a leader, but at the same time he is calm and level-headed.

"It's an honor," the 30-year-old Neuer said. "I am proud to be captain of the team. But we all know that we need to have more than one leader on the pitch if we want to be successful. Key aspects are discussed within the team council and we make decisions together."

"Of course I know that the captain's armband is important symbolically," he added. "I'm pleased that the head coach has placed in trust in me by naming me as captain."

Neuer is no stranger to wearing the armband, having done so 13 times previously, including in five of Germany's six games at the European championship in France this past summer.

Neuer has made 71 appearances for Germany since making his debut against the United Arab Emirates in 2009. He was part of the German team that won the 2014 World Cup in Brazil and has been named goalkeeper of the year each of the last three years.

The Bayern Munich goalkeeper is to see his first action since being named captain on Sunday, when Germany face Norway in Oslo in their first match of qualifying for the 2018 World Cup in Russia.