Manchester to Madrid: The rise of Cristiano Ronaldo from talented teenager to football icon

Ever since he burst onto the stage in 2003, Ronaldo has been in the spotlight. After winning FIFA's world player of the year award on Monday, we reflect on his rise from talented teenager to global football icon. 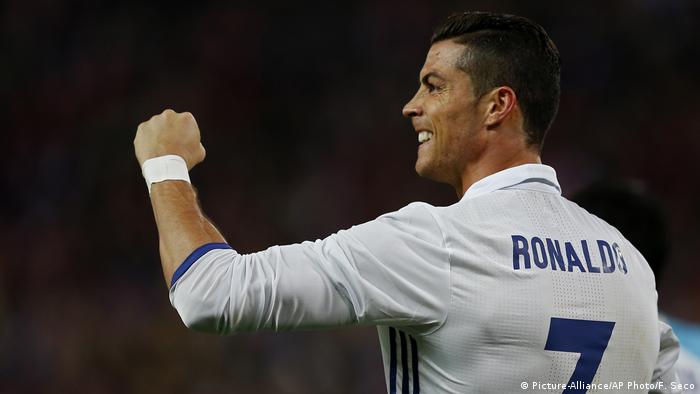 Cristiano Ronaldo will have to find a little more space in his trophy cabinet as he notched up another prize, this time FIFA's world player of the year award.

While the merits of an individual award for a team sport have long been debated, 2016 was undeniably a fine year for the Portuguese. He scored the winning penalty in Real Madrid's Champions League final shootout against Atletico Madrid in May, and turned his tears of pain to tears of joy as he limped off in the final of the European Championship before watching his team claim the prize.

There is also the frightening tally of 55 goals in 57 appearances in the calendar year, a year he finished as a 31-year-old. Wasn't he supposed to be entering the twilight of his career? Not a chance.

Manchester United spotted Ronaldo as an 18-year-old when he starred in a 3-1 victory for Sporting CP in a friendly against the English giants in August 2003. 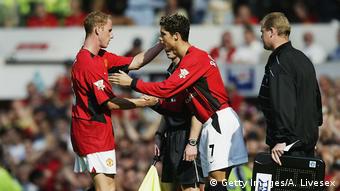 Ronaldo comes on for his Manchester United debut against Bolton in 2003.

Sir Alex Ferguson, the legendary United coach, was so impressed by the raw talent of the teenager that he instructed the club to launch a 15-million-euro ($15.9 million) bid, which was enough to secure the signing of Ronaldo for a fee that at the time made him the most expensive teenager in the history of English football.

Ronaldo's early days in Manchester were promising as he was given the number seven shirt, made famous by Old Trafford legends George Best, Eric Cantona and David Beckham, the shirt's previous incumbent. Although Ronaldo was criticized for a lack of end product to make his abudance of individual skill a benefit to the team, the Portuguese polished his game under Ferguson, adding goals and assists to his game.

He wrapped up his first season at united with the first goal in the 2004 FA Cup final against Millwall and his knack for scoring vital goals on the biggest stage continued as he went from strength to strength at United.

The first ever Portuguese to play for Manchester United evolved into the team's most important player, and would go on to become one of the greatest players in Premier League history.

Ronaldo's rapid rise from raw but talented to a football icon happened over a few seasons in Manchester. Defenders were bamboozled by his brilliance on a weekly basis and even by the age of 19, was a European Championship finalist with Portugal, only for Greece to shock Ronaldo and the rest of Europe with their remarkable upset win over red-hot favorites Portugal. A young Ronaldo was remembered for his tears in that tournament; little did he know he would have to wait another 12 years for a shot at international glory with his nation. 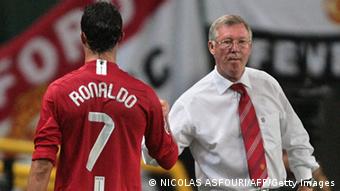 He was more successful at club level though, inspiring Manchester United on their run to the 2008 Champions League final, scoring a header to give United the lead against Chelsea in Moscow. Ronaldo missed a penalty in the shootout, but United were ultimately victorious as Ronaldo finished the season as the top scorer in the tournament with eight goals.

Ronaldo was instrumental in an unparalleled period of success for United under Ferguson, a man Ronaldo regards as his footballing father. Ronaldo won three consecutive Premier League titles at Old Trafford, as well as one FA Cup, two League Cups and that Champions League title.

Ronaldo had won everything there was to win in England; it was time for a new challenge. 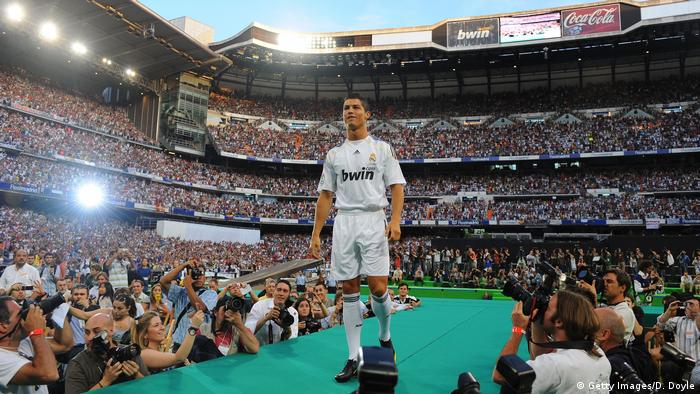 Ronaldo was signed by Real Madrid in 2009 for a world record fee.

Real Madrid paid a world record transfer fee of 94 million euros for Ronaldo, whose status as the world's greatest player was not in doubt after his great years at United. Ronaldo was made to stay a year longer in Manchester than he really wanted, but Real eventually got their man in the summer of 2009 – and he was unveiled in front of 80,000 fans. Even Diego Maradona could only manage 75,000 when he signed for Napoli.

Despite the countless trophies and awards he received in England on a collective and a personal level, Ronaldo somehow elevated his performances at the Bernabeu, scoring in each of his first four league games for Los Blancos, becoming the first player in the club's history to do so.

After the departure of Raul to Schalke, Ronaldo was again handed the number seven shirt. This time the shirt was associated with the club's record scorer Raul, who had been the club's leading marksman for over a decade. Ronaldo was the man expected to fill his boots.

Ronaldo hit staggering heights at Real Madrid, clocking up an astonishing 60 goals in the 2011-12 season, but Ronaldo was unable to inspire the club to the sustained level of success it expects. He had to wait three years before winning his first La Liga, achieved under Jose Mourinho.

The arrival of Carlo Ancelotti at Real Madrid brought the best out of Ronaldo, who had now been joined by Gareth Bale, a 100m euro signing from Tottenham Hotspur who helped take some of the heat off Ronaldo. Under Ancelotti, Ronaldo finally got his hands on the Champions League trophy again in 2013-14, scoring a last minute penalty to ensure Real beat city rivals Madrid in Lisbon, his nation's capital.

Ronaldo went on to win the Champions League again last season, again against Atletico Madrid, and has one La Liga title, two Champions Leagues and two Copa del Reys to his name to date.

The great debate will never have a definitive answer, but his personal rivalry with Lionel Messi has occupied countless column inches and debates among fans for as long as the pair have been at their peak. 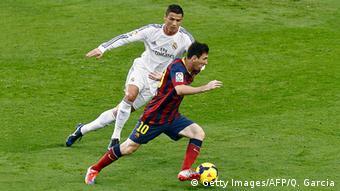 Ronaldo is now only one Ballon d'Or behind Lionel Messi.

After moving to Madrid in 2009, Ronaldo was the face of Real and the slightly younger Messi the face of Barcelona. The media conjured up a personal rivalry that, in time, has developed into a mutual respect and perhaps even friendship between the two.

Messi, the twinkle-toed maestro, now leads 5-4 in the Ballon d'Or stakes with every facet of their careers compared in excruciating detail. One thing is for sure: the pair have dominated European football for the last ten years and Spanish football for almost as long, and even at 31, Ronaldo has raised the bar once again.

Twelve years after Ronaldo's tears were the enduring image of the 2004 European Championship final, history seemed to be repeating itself when he was stretchered off in the final after a foul by Dimitri Payet denied fans of the final's best player. 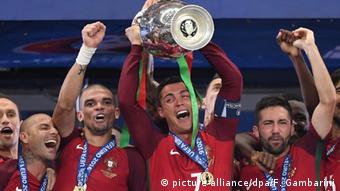 Ronaldo won Euro 2016 with Portugal, 12 years after losing in the final to Greece.

Ronaldo's superb performances had helped Portugal get to the final and, while he was unable to continue on the pitch, he encouraged his teammates to secure the country's long wait for major silverware. They eventually did so against favourites France courtesy of Eder's extra time goal.

The tears of pain turned to tears of joy and Ronaldo was finally a champion with Portugal, the icing on the cake in a year to remember for one of the greatest players the game has ever seen.

The 36-year-old left Juventus for his old club in the hope of recapturing the form that made him a superstar a decade ago. Manchester United have welcomed him with open arms.

Widespread media reports have said Portuguese superstar Cristiano Ronaldo wants to leave Manchester United. But the club's new coach has made his first public comments on the issue and is adamant the 37-year-old is not for sale.