A concert grand piano believed to be the largest in the world has gone on display. Pianists have to climb a steep flight of stairs to play it, but the experience may be well worth the trouble, its inventor says. A concert grand piano boasting up to five-meter-long (16.4-foot-long) strings was displayed to the public for the first time on Friday in a new concert hall in the Latvian port city of Ventspils.

Although the fact has not yet been certified by the Guiness Book of World Records, the custom-built instrument made by German-born piano maker David Klavins is believed to be the world's largest grand piano.

Apart from its size, the instrument is also made special by the fact that audiences seated in the concert hall can see the strings stretching down against the wall to which the piano is attached.

"The most suitable music for this instrument would be all the very expressive works, for example Rachmaninov, Scriabin but also Beethoven's sonatas would sound totally different on this instrument," the 65-year-old Klavins told the news agency Agence France-Presse. 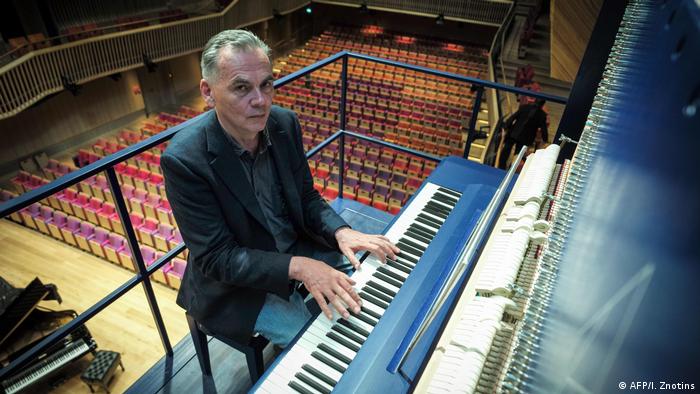 Klavins built the piano in his workshop in Vac, Hungary

Klavins told AFP that his aim had not been to build an instrument of record size, but "to create the best imaginable sound for all the performers and listeners who come to this particular hall."

The creative head of the new concert venue in Ventspils, Miks Magone, said the piano had met with great interest from composers and performers.

The mayor of the city, Aivars Lembergs, hopes that the concert venue with its huge piano and two halls will play a part in attracting foreign tourists and music lovers to the city.

Klavins specializes in developing innovative forms of the piano, which was invented by the Italian Bartolomeo Cristofori around 1700 and soon superseded its predecessor, the harpsichord, partly owing to the greater possibilities it offers to the performer for playing at different levels of volume.

Twenty instruments in one piano

Twenty instruments in one piano