Tens of thousands have rallied against irregularities in polls, which they say stole a win from the Malaysian opposition in a close race with the ruling coalition. The opposition has pledged to fight the results. 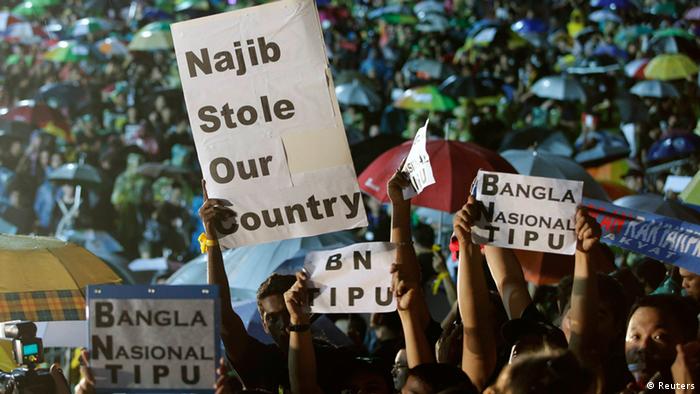 A stadium in Kuala Lumpur filled past its capacity on Wednesday as some 50,000 supporters of the opposition, clad in black and blowing horns, filed in to rally against the country's general election results. Opposition leader Anwar Ibrahim vowed to uncover the truth behind the outcome, which left the nearly 60-year rule of the National Front once again unbroken.

"This is the beginning of a battle between the people and an illegitimate, corrupt and arrogant government," Anwar told the crowd.

The National Front, headed by Prime Minister Najib Razak, won 133 seats in the country's 222-member parliament on Sunday. Ibrahim's three-party opposition alliance garnered only 89 seats, even though it had won more than half of the popular vote.

"[The National Front] has robbed the rights of the people. We will prove that they have lied in 30 parliamentary seats," he told the ecstatic, multi-racial crowd.

"We will go to every corner of this country," Anwar declared, prompting roars from the crowd.

"We will continue to struggle and we will never surrender!"

The prime minister's office dismissed Wednesday's demonstration as an effort to incite unrest, maintaining its stance that the elections were conducted freely and fairly.

Change is what many Malaysians had sought when they cast their vote for opposition leader Anwar Ibrahim in national elections on Sunday. He lost but the days of incumbent ruler Najib Razak could be numbered. (06.05.2013)

However, third party observers also expressed concern on Wednesday about the May 5 election.

In its congratulatory message to Prime Minister Razak, the White House urged Malaysian authorities to "address the concerns that have been raised" by conducting an investigation.

Malaysia's Institute for Democracy and Economic Affairs issued a report which cast doubt on the validity of the outcome.

Sunday's elections were "only partially free and not fair," the institute said, citing doubt about the integrity of voters' registration roll and pointing to electoral bias in the ruling coalition's favor.

Prior to the vote, this year's election had been anticipated as the first feasible chance for the opposition to wrest power from the National Front, which has led Malaysia since it gained independence in 1957.

Opposition leader Anwar Ibrahim previously served as deputy prime minister in the 1990s, but was later ousted following a political falling out. A court sentenced him to six years in prison on charges of sodomy and corruption.